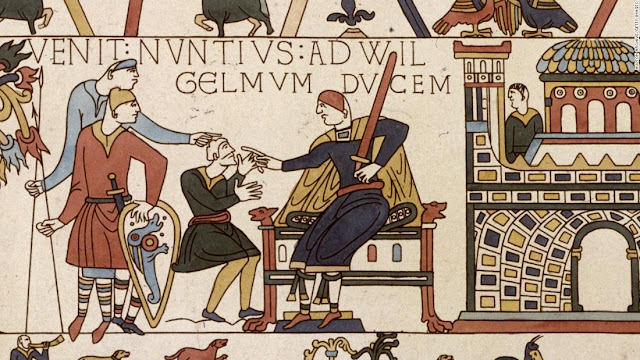 The mysterious and majestic Bayeux Tapestry is a  stunning piece of visual communication about a decisive battle in British history. The artists of this incredible piece of graphic design have produced a sophisticated, thought provoking, and subtle propaganda against the horrors of war and their impact on a community and its social fabric. Scores of dead bodies, with their horrifying wounds including decapitation, a burning house and various acts of atrocities constitute  a powerful manifesto against any war. 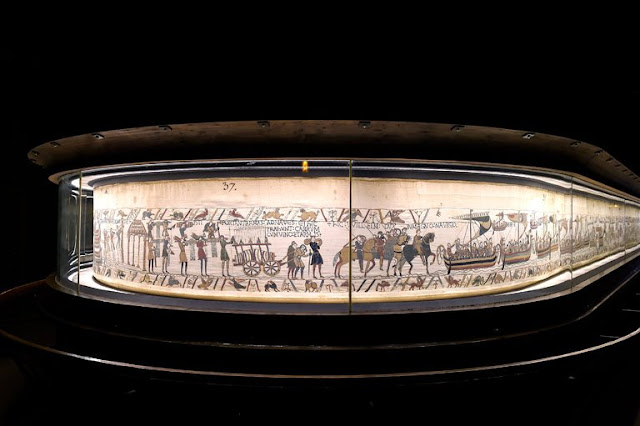 Little is known about the origins of the tapestry. Historians have long debated the origins of the tapestry. The earliest written reference to it is from 1476, in an inventory from Bayeux Cathedral, but it is not known whether it was made in England or France. Until the Renaissance, most Northern European embroidery could be fairly categorized as religious art and confined itself to Biblical themes. The Bayeux Tapestry was a major exception to this trend. According to the latest research, the Tapestry was commissioned by William the Conqueror's half-brother Odo, Bishop of Bayeux, Normandy, in whose cathedral the Tapestry was discovered. 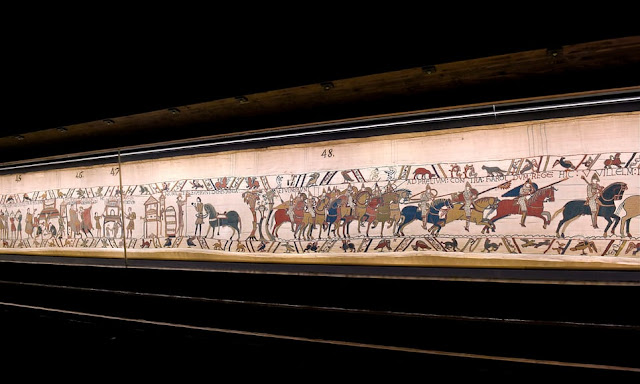 It is highly probable that the tapestry was designed and embroidered in England during the 1070s  by a mixture of medieval artists, including Anglo-Saxon, Norman and Breton seamsters, possibly in the embroidery workshops of Canterbury or Winchester,  since by then Odo had been created Earl of Kent and had established himself in the county. 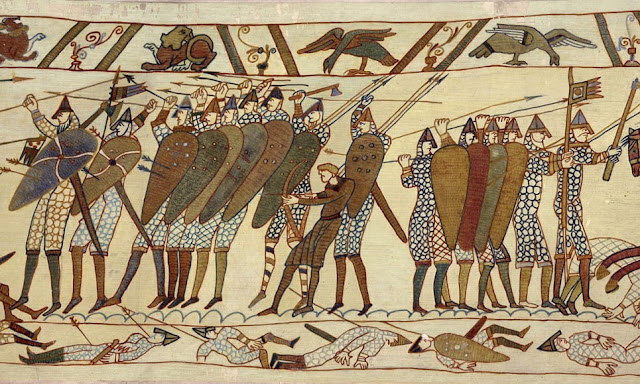 We know that Anglo-Saxon weaving and needlework (known as Opus Anglicanum [English Work]) was highly regarded throughout the Continent, and the seamsters traditionally employed the same vegetable dyes and colour pigments as those found in the Tapestry. 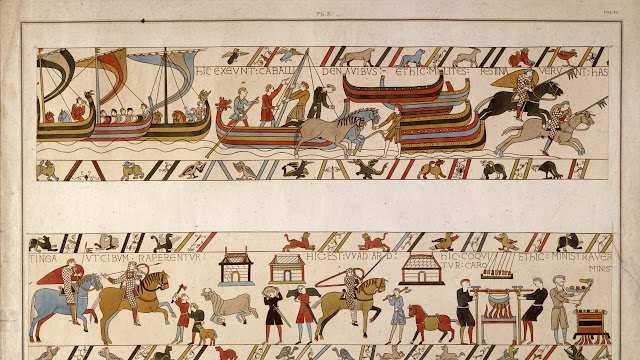 The Latin inscriptions on the tapestry have an Anglo-Saxon influence. According to traditional French sources, however, the Bayeux Tapestry was commissioned by William the Conqueror's wife, Queen Matilda. In fact, in France the work is still referred to as "La Tapisserie de la Reine Mathilde", as is the museum in which it hangs.

The tapestry depicts more than 70 scenes chronicling the events leading up to the Battle of Hastings, by forces of William the Conqueror, who invaded England in 1066. This was one of the most important battles in British history. The Norman Conquest transformed England’s language, laws and customs.

The tapestry is possibly the best known textile work in the history of art , and like most other embroidered hangings of the Middle Ages, it is traditionally called a tapestry. However it is not actually a piece of real tapestry which is woven on a loom and the design and colour scheme are woven into the cloth. It is, in fact, an embroidery, which is known as a "ground fabric" on which threads are sewn or embroidered to form a picture.

Nevertheless, as an important work of Medieval art, the Bayeux Tapestry is a rich source of historical information. It has been in Bayeux since at least 1476, and its creation may have been timed to coincide with the consecration of the city's cathedral in 1077. It is currently on public display at the Musée de la Tapisserie de la Reine-Mathilde in the former Bishop's Palace in Bayeux.

The Bayeux Tapestry is made of a linen band,  approximately 231 feet in length and 19.5 inches in width, and is embroidered in coloured woollen yarns with more than 70 scenes from the Norman Conquest, involving the two protagonists: Harold, King of England; and William, Duke of Normandy.

The event starts with King Harold's visit to France and ends with the flight of the English soldiers from the Hastings battlefield. There are decorative bands along the top and bottom, while a running commentary in Latin is stitched into the pictorial storyboard. Unfortunately, the final section of the tapestry - roughly 5 feet in length - has been missing for centuries. And according to experts, the final words of the tapestry's inscription ("Et fuga verterunt Angli") were added as late as 1814. However none of this detracts from the beauty of this work, a magnificent exemplar of Romanesque crafts from the 11th century,

The work is embroidered in wool yarn  on a woven linen ground that is turned brown with age. The artists have used two styles of stitching: outline/stem stitch for the lettering and the outlines of figures, and couching/laid work for the rest. The main colours of the yarns are terracotta, blue-green, gold, olive green, and blue. Other hues include dark blue, black and sage green. Later repairs and re-stitching were done in light yellow, orange, and light greens. The complete work is made up of 9 linen sections, each of which were completed before being stitched together.

Some people argue that the style of some figures are so different they must have been embroidered by different people. Others argue that it's not the embroidery which is different – but the way the characters were drawn.Examining at the embroidery techniques at the back of the tapestry it has appeared that it is the work highly skilled professional embroiderers. 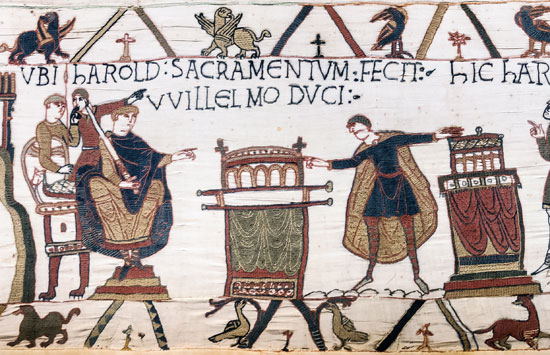 The basic design consisted of a broad middle zone with narrow decorative borders top and bottom. Most of the action takes place inside the middle zone, pictorialized in a series of scenes before and after the Norman invasion of England, during the period 1064-1066. The main characters are King Edward the Confessor, King of England; his brother-in-law and successor to the English throne, Harold Godwinson; William, Duke of Normandy and son of Robert the Magnificent. 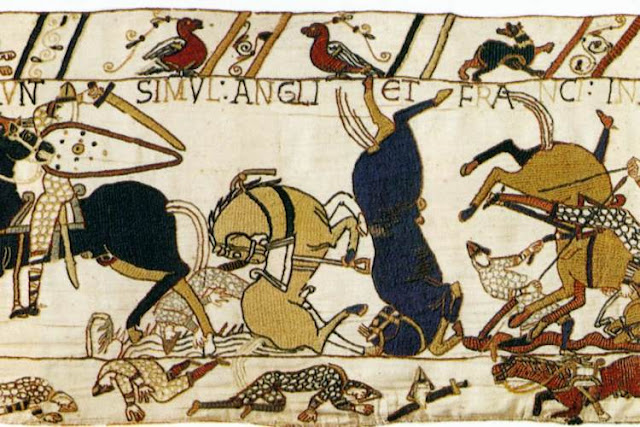 Latin inscriptions - stitched in dark blue and providing names of people and places and other comments - also appear in the central zone and, less often, in the top border. The borders are purely decorative, with images of animals, rural life and hunting. The top border also features the first known picture of Halley's Comet. Following its "discovery" in the mid-1720s, a backing cloth was sewn onto the linen, to which reference numbers were added in ink, about 1800. 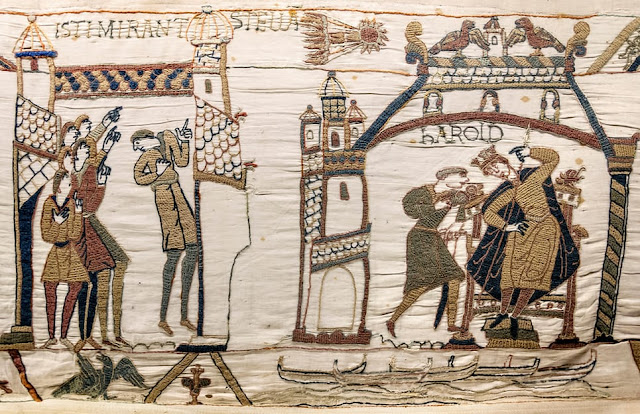 The existence of the Tapestry was first mentioned in 1476 when it appeared in an inventory of Bayeux Cathedral. It was next referred to in 1724, in a report sent by Antoine Lancelot to the Academie Royale des Inscriptions et Belles-Lettres which mentioned a drawing he had received, based on an earlier work depicting William the Conqueror. The writer was unsure whether the earlier work was a painting, a sculpture or even a tapestry. Not long afterwards, the French Benedictine scholar Bernard de Montfaucon found the tapestry preserved at Bayeux Cathedral - where it was being displayed in public once a year to coincide with the Feast of St. John the Baptist - and published drawings together with an extensive description of the work.

During the French Revolution, the Tapestry narrowly avoided destruction and in 1803, after coming into the possession of the official commission of fine art, was moved to Paris to be displayed at the Musee Napoleon. Within a few years, however, it was returned to Bayeux. In 1842, following concerns about its preservation, it was displayed in a special-purpose room in the city's public library. In the summer of 1944 it only just survived being transferred to Berlin. After the liberation of Paris, the Tapestry was briefly displayed in the Louvre before being returned to Bayeux the following year. 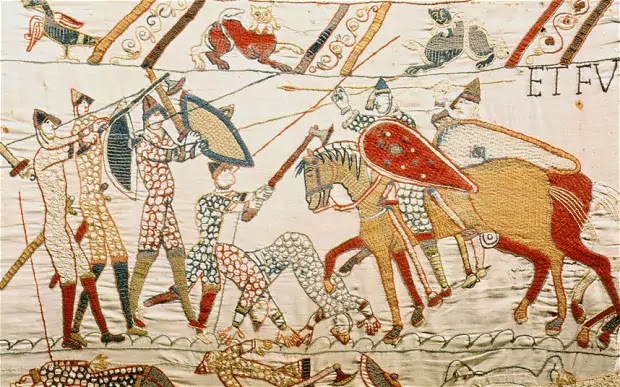 Several replicas of the Bayeux Tapestry have been created, including: (1) a full-size copy, now exhibited in the Museum of Reading, Berkshire, which was created in 1885-6 by artist William Morris in collaboration with textile manufacturer Thomas Wardle, his seamstress wife Elizabeth, and thirty other embroiderers; (2) a full-size replica completed in 1996 by Professor Ray Dugan of the University of Waterloo, which has since been exhibited in various art museums in Canada and the United States. (3) a hand-painted full-size version of the Bayeux Tapestry, commissioned by Dr. E.D. Wheeler, former dean at Oglethorpe University, which resides at the University of West Georgia, to whom it was donated in 1997. (4) A half-size mosaic of the Bayeux Tapestry, created by Michael Linton (1979-99) is on public display in Geraldine, New Zealand. It also features a hypothetical reconstruction of the missing final scenes of the Tapestry, concerning the lead-up to the coronation of William the Conqueror in Westminster Abbey on Christmas Day 1066. 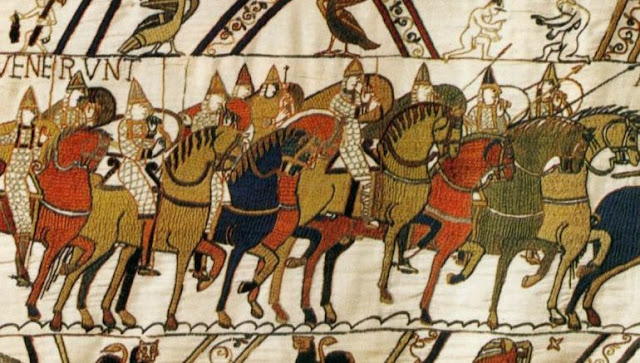 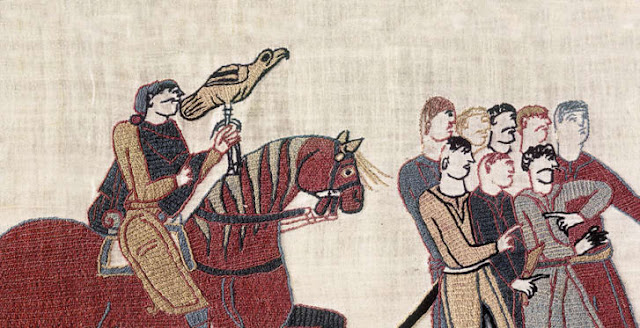