Throughout their histories a symbiotic relationship has existed between the book and graphic design.  The modern form of the book which appeared around the second century AD is called the codex. The codex of Middle Ages,  were manuscript written on either papyrus or parchment, vellum, made from animal skins, and sewn together into a modern book format.  The writing surface of the early illustrated codices were  parchments . Gradually in Europe and the Middle East, parchments replaced papyrus for production of the codex and remained the preferred media in Europe for the next 800 years when the mass production of paper gradually replaced them. The  ancient graphic designers worked in the European monasteries, creating harmonious and balanced layouts for  textual materials and illustrations that were to based on a sophisticated grid system designed to facilitate a spiritual communication of creed.

Paper which was invented in China around 105 AD, was at first prepared from bark and hemp. These were not quite suitable for drawing and decoration. Although, paper produced by the Chinese technology was of a high standard. This technology was transferred to Japan around 610 AD, and then to the Arab world via Samarkand in Central Asia. In America, the Aztec and Mayan civilizations also produced a more primitive bark paper from an unknown date.

In Europe paper was introduced by Arab traders of Spain. Italy was the first European country that produced paper around 1276 AD, and more than two and half centuries later England began to produce it in 1495. The primary reason for this slow pace was the low quality of these papers which were unsuited for graphic design of European religious manuscripts.1 Among these early European manuscripts are the Bibles that have been created in the monasteries of Ireland, Scotland, and England. Many of graphic decorations in these books have been influenced by the Arabesque style of Muslim manuscripts that employed mainly geometrical and abstract designs for decorating their holy books and their mosques.


Medieval styles of  the Hiberno-Saxon in Ireland and England  the most famous examples of which are Irish illustrated manuscripts like the Book of Durrow (c.650-680) and the Book of Kells (c.800),  were influenced by the decorative style of the Coptic manuscripts of Egypt, which afterwards spread in Kildare, Clonmacnois, Clonfert, and Monasterboice in Ireland,  Iona in Scotland and  Lindisfarne off the coast of Northumbria in England  in the seventh and eighth centuries.  In their visual grammar  numerous decorative embellishments, of either abstract or representational art were used in conjunction with historiated letters, Celtic crosses, trumpet ornaments, rhombuses, pictures of birds and animals, to create an attractive layout.

The prefaces to each chapter, were called carpet pages, which were a composition of intricate set of geometric or Celtic interlace designs, that allowed artists some degrees of freedom to express his individuality. Over the next few centuries these manuscripts style were followed by the Carolingian, Ottonian and Byzantine styles, and culminated by a number of elegant Romanesque illuminated manuscripts (c.1000-1150), such as the St Albans Psalter, the Bible of St Benigne, the Egbert Psalter, the Winchester Bible and the Moralia Manuscript.


Later on, artists like Jean Pucelle produced the finest Gothic illuminated manuscripts (1150-1350), including The Belleville Breviary (1323-26, Bibliotheque Nationale, Paris) and The Hours of Jeanne d'Evreux (1324-28, The Cloisters, Metropolitan Museum of Art), as well as other works such as: the Psalter of St Louis, the Bible Moralisee, the Minnesanger Manuscript, the Amesbury Psalter, and Queen Mary's Psalter. They were followed, during the era of International Gothic illuminations, by masterpieces such as the Brussels Hours, by Jacquemart de Hesdin (c.1355-1414); Les Tres Riches Heures du Duc de Berry (1413, Musee Conde, Chantilly) by the Limbourg Brothers (fl.1390-1416); and works by the great French artist Jean Fouquet (1420-81)


In the early 9th century Archbishop Ebo of Rheims, at Hautvillers (near Rheims), assembled artists and transformed Carolingian art to something which evoked a revival of Roman classicism. However, it still kept its characteristics of basically linear presentation, with no concern for volume and spatial relationships. The style was reminiscent of the Merovingian and Hiberno-Saxon traditions known as the art of the Migration Period . The Gospels were painted with energetic, bright and vivid brush strokes, evoking an inspiration and energy unknown in classical Mediterranean forms.

Such designs are scattered throughout the text with decorated initials and small figures of animals and humans often twisted and tied into complicated knots and many of them serve to fill spaces left at the end of lines. Many significant texts, such as the Pater Noster have decorated initials. No earlier surviving manuscript has this massive amount of decoration.

The first letter of the text is enlarged and decorated, with the following letters surrounded by dots.
The monks who endowed the Book of Durrow with their calligraphic art and decorative designwork can be regarded as being among the earliest Irish artists of the medieval period. The Gospel manuscript itself exemplifies the style known as Hiberno-Saxon or Ultimate La Tene, which was widely practised across the British Isles and Ireland.  We discuss the layout of the manuscripts in chapter 55.

The surviving European illuminated manuscripts, particularly those of Ireland and Italy that are created by mostly monastic scribes of late antiquity, with their decorated initials, borders and miniatures constitute the inception of the modern graphic design. Scriptoria were workshops devoted to the hand-lettered copying of manuscripts. A scriptorium was most often an extension of a library for the professional scribes to copy manuscripts. The scribes were working under the direction of an armarius or a scrittori, who acted as an art director. He was director of a monastic scriptorium, who provided the scribes with their materials and ensured the quality of the process. Decorations and illuminations were added by other resident artists.


Illuminated manuscripts are classified according to their historic periods and types, such as


Insular script: a script characterized by thick initial strokes and heavy shading developed from half uncial under the influence of uncial by Irish scribes about the 5th and 6th centuries a.d. and used in England until the Norman conquest and in Ireland with modifications to the present day.

Merovingian script: is the writing of the pre-Carolingian hands of France that were derived from Latin cursive script. Luxeuil, in Burgundy, was a particularly important centre in the development of a Merovingian cursive style during the 7th and 8th centuries. The style of script that developed in northern France at the monastery of Corbie, a daughter house of Luxeuil, is especially noteworthy for the influence of half-uncial and uncial. Merovingian writing is interesting to paleographers because of the part it had in shaping the black-letter script that was prevalent in the Middle Ages. Like Visigothic script, the Merovingian hands inherited the dominant vertical rhythm of the Latin cursive script of the ancient Romans. Angularity as a prevailing tendency and an effect of lateral crowding, especially in the first lines of a Merovingian manuscript, led to the use of the term picket- fence style by some 20th-century scholars of calligraphy. 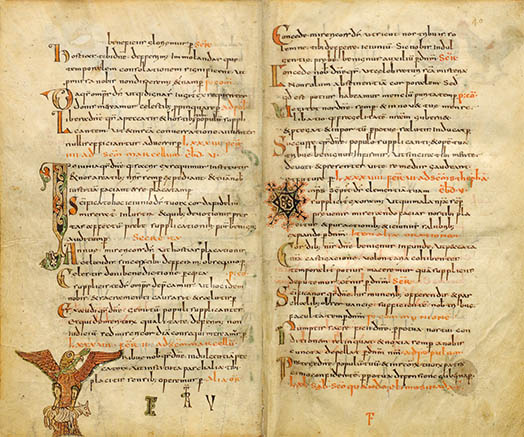 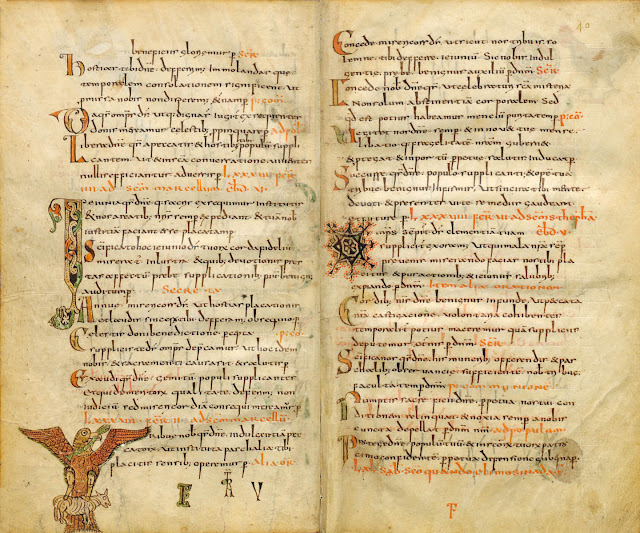 The Roman scripts of the fourth century evolved over the next several hundred years into many different regional styles, e.g.: Roman cursive minuscule became Insular Majuscule in Ireland and England, or Merovingian and Luxeuil minuscules in France, or Lombardic and Beneventan minuscules in Southern Italy, or Visigothic minuscule in Spain, or Germanic minuscule in Germany, etc. The point is that by the eight century the situation was a mess5 and this, not surprisingly, proved rather problematic for Charlemagne’s administration of his Frankish empire. To rectify this situation Charlemagne, in his 789 Admonitio Generalis, set new standards for copying texts, including the adoption of a new more uniform and more legible script to replace the various, and often nearly illegible, regional styles. This script, Carolingian (or Caroline) minuscule, was based on the Merovingian and Germanic scripts and the Roman half-uncials and featured an uncial d, a modern a and g, and clubbed ascenders.

Carolingian manuscripts: These manuscripts were mainly created by clerics in a few workshops around the Carolingian Empire. Each of these workshops practiced its own style that developed based on the artists and influences of that particular location and time. As the earliest producer of Carolingian manuscripts, the Court School of Charlemagne initiated a revival of Roman classicism, yet still maintained Migration Period art (Merovingian and Insular) traditions in their linear presentation, with no concern for volume and spatial relationships. The Utrecht Psalter was perhaps the most important of all Carolingian manuscripts, because of its innovative and naturalistic figurine line drawings, which were to become the most influential innovation of Carolingian art on later periods. 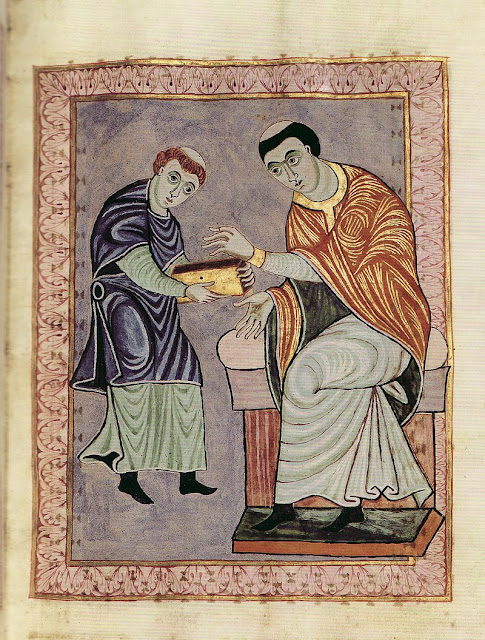 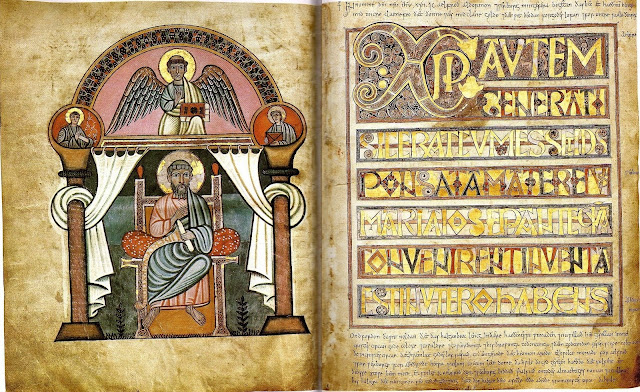 Ottonian manuscripts: The finest achievements of Ottonian illumination are connnected with the patronage of Egbert, Archbishop of Trier (977-93), and the Imperial court. The origin of this interrelated series of illuminated manuscripts has long been connected with the Imperial monastery of Reichenau, believed to have been the seat of the chancellery of the Emperors, but it has been argued more recently that most of the manuscripts were produced at Trier. What is quite clear is that the scriptorium worked both for Egbert and for the Emperors Otto II (973-83), Otto III (996-1002), and even on until the reign of Henry II (1002-24), and that it should be seen first and foremost as an Imperial scriptorium. One of the manuscripts of this closely interrelated group of masterpieces of book illustration - a gospel lectionary which sets out the readings from the gospels throughout the liturgical year, known as the Egbert Codex.

Romanesque manuscripts:There are more illuminated manuscripts extant from the Romanesque period than from all earlier periods. It presented viewers with an energetic art which flourished in England, and migrated across the channel to France. Examples include,Gospels of Saint-Bertin by an English painter at Saint-Bertin, near Boulogne-sur-Mer on the Channel coast, at the end of the tenth century." The human narrative style is matched by the sprightly drawing, the delicate and transparent colors, and the rippling drapery folds. Citeaux: The Romanesque manuscript style appeared in numerous forms, another possibility appearing in a highly imaginative illumination from the Moralia in Job of Saint Gregory, painted at the onset of the twelfth century of the Burgundia monastery of Citeaux. The Bible of Bury Saint Edmunds: Figures, border, ornament, architecture, and landscape, even the text, are treated equally in brilliant color, resulting in total master of surface design, and The Bayeux tapestry: an embroidery done on "eight bolts of natural colored linen with only two different stitches of wool; in tapestry, the design is woven along with the fabric.

Gothic manuscripts: Apparently, for a period of 40 years during the fourth century a Gothic Bishop, Wulfila, prepared a translation of almost all the Bible into the Gothic language. In order to accomplish this task he had had to invent letters. None of the original manuscripts has survived and the lion’s share of those texts we have nowadays is apparently from the sixth century. The best preserved manuscript is the so-called Codex Argenteus – the ‘Silver Book.’ In the great debate concerning the nature of God, which had flared up in the early Church, the Goths happened to be Arians. As it turned out, they were on the loosing side and as such, were destined to history’s dustbin. In practice, it meant that nobody studied or copied their writings and either by intentional destroying or simply by neglect, very little of their heritage has survived. The main reason why anybody would be interested in what was left extant from their legacy is its linguistic value; Gothic is the oldest Germanic language of which we have written evidence. 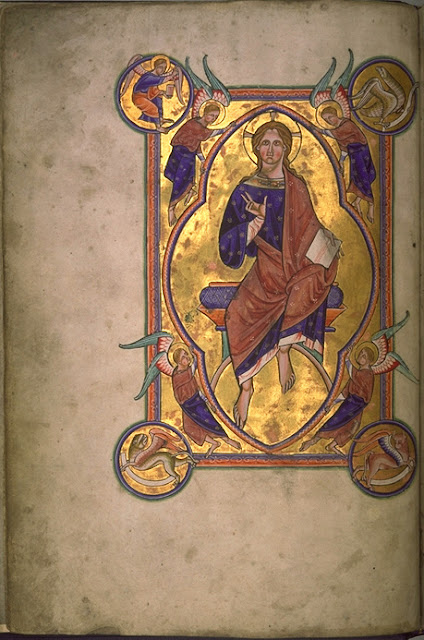 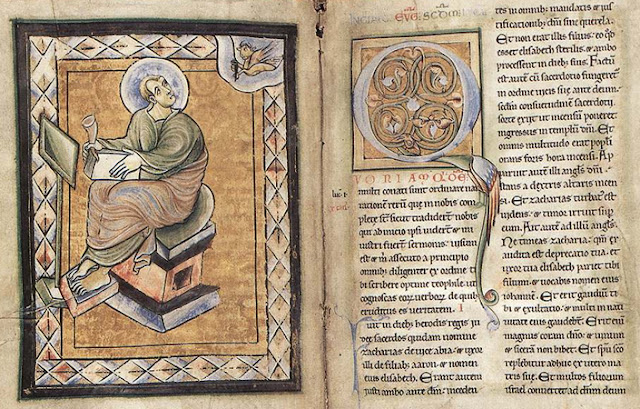 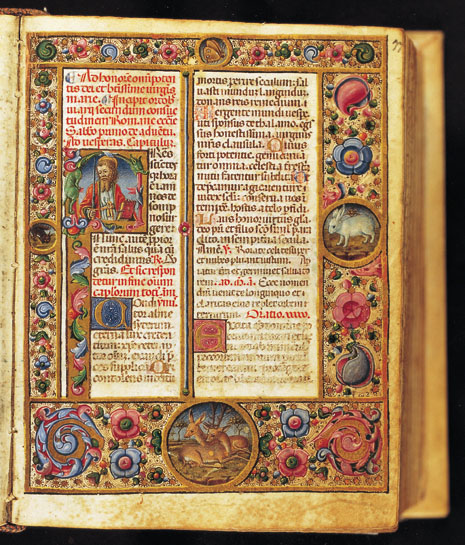 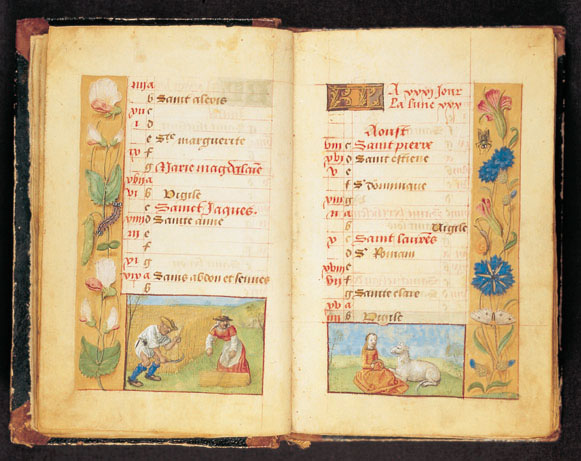 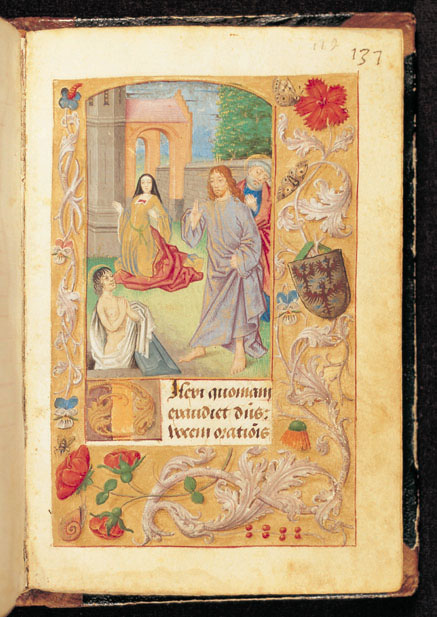 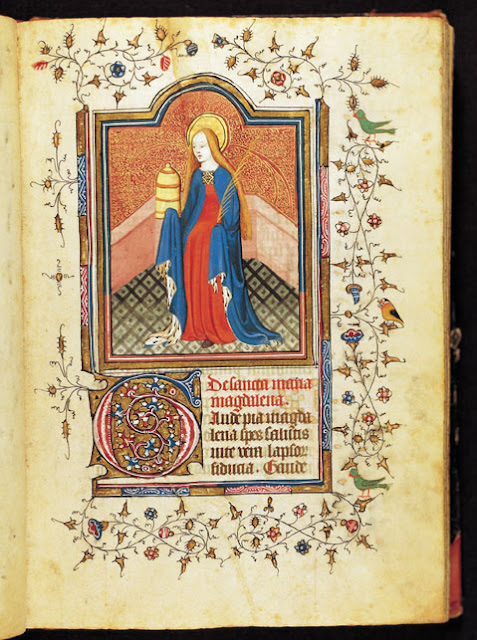 The Book of Kells, Ireland, 8  Century. 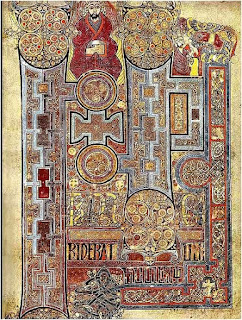 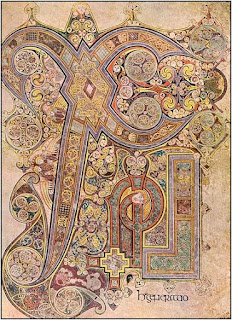 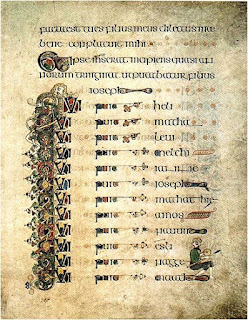 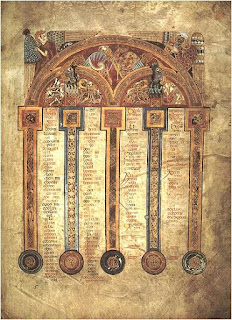 The Book of Lindisfarne, England.  Circa 7-8 century 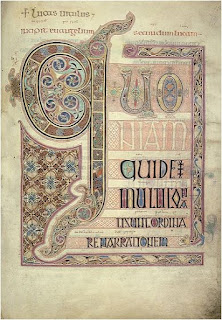 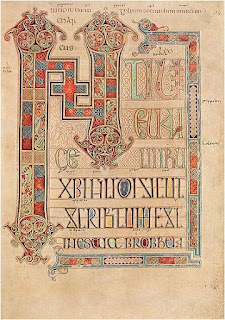 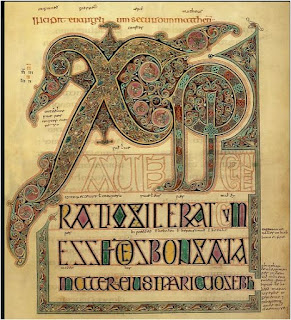 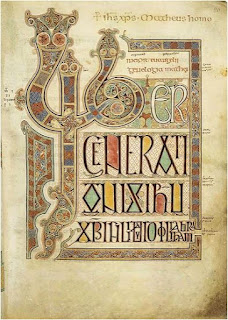 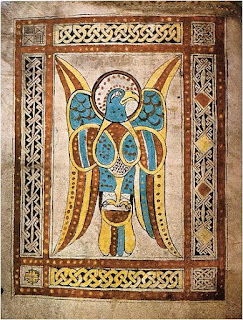 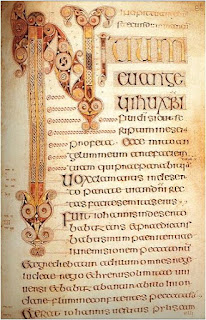 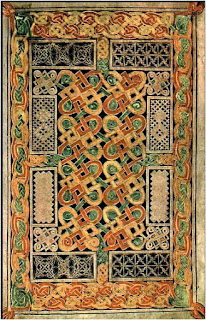 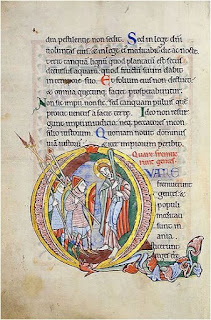 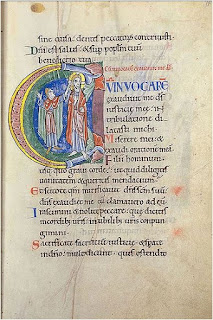 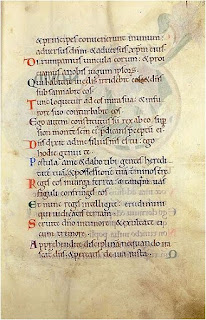 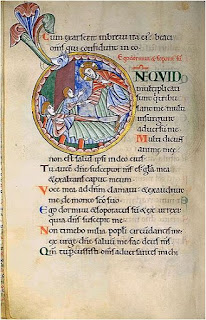 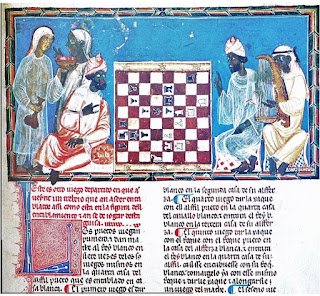 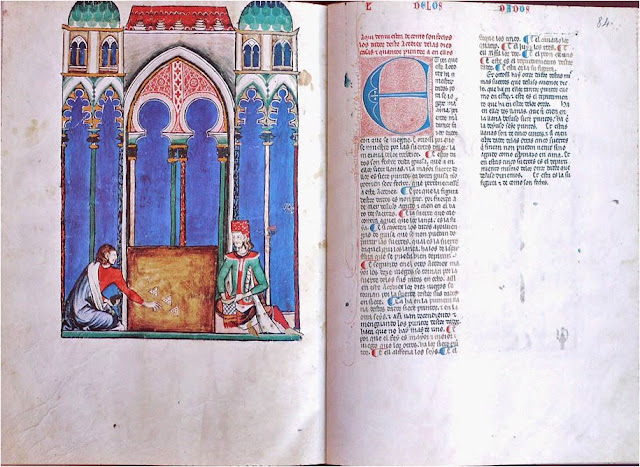 Go to the next Chapter: Chapter 4 - The Islamic Calligraphy