Ancient rock reliefs played the role of today's posters . Among these were the Persian rock reliefs, the Greek ''axons'' the Roman ''Albums'', and other ancient carved images from Egypt, and Far East. The Persian rock reliefs depicted the triumphant stories of the Parthian and Sassanian kings. In ancient Greece the name of athletes, and games schedules were written on columns that were slowly turning on an axis. Romans used whitewashed walls in their markets in which sellers, money lenders, and slave traders wrote their announcements and advertised for their products, which in order to attract the attention of customers they added attractive designs .

The inscription includes three versions of the same text, written in three different cuneiform script languages: Old Persian, Elamite, and Babylonian. A British army officer, Henry Rawlinson, had the inscription transcribed in two parts, in 1835 and 1843. The text of the inscription is a statement by "Darius I" the great of Persia, written three times in three different scripts and languages: two languages side by side, Old Persian and Elamite, and Babylonian above them. Some time around 515 BC, he arranged for the inscription of a long tale of his accession in the face of the usurper Smerdis of Persia (and Darius' subsequent successful wars and suppressions of rebellion) to be inscribed into a cliff near the modern town of Bisistun, in the foothills of the Zagros Mountains of Iran.

The inscription is approximately 15 metres high by 25 metres wide, and 100 metres up a limestone cliff from an ancient road connecting the capitals of Babylonia and Media (Babylon and Ecbatana). It is extremely inaccessible as the mountainside was removed to make the inscription more visible after its completion. The inscription was illustrated by a life-sized bas-relief of Darius, holding a bow as a sign of kingship, with his left foot on the chest of a figure lying on his back before him. The prostrate figure is reputed to be the pretender Gaumata. Darius is attended to the left by two servants, and ten one-metre figures stand to the right, with hands tied and rope around their necks, representing conquered peoples. Faravahar floats above, giving his blessing to the king. One figure appears to have been added after the others were completed, as was (oddly enough) Darius' beard, which is a separate block of stone attached with iron pins and lead.

The monument suffered some damage from soldiers using it for target practice during World War II. In recent years, Iranian archaeologists have been undertaking conservation works. The site became a UNESCO World Heritage Site in 2006 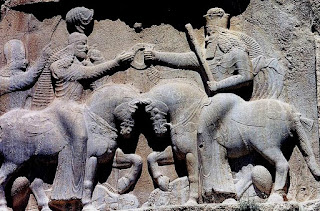 This Persian rock relief depicts Ardashir I Coronation scene; as the first king of the Sassanid Empire of Iran, Ardashir receives the ribboned diadem, the symbol of kingship, from the spirit of Darius I of Persia of the Achaemenid dynasty. Under the horse of the King Ardashir lies the last of the Parthian Kings, Artabanus IV of Parthia. Under the horse of King Darius lies Gaumata the usurper, a Magian,. The relief of Ardashir is, therefore, the legitimization of the new Sassanian dynasty by the pre-Alexander Achaemenid dynasty. The inscription in Persian, Parthian, and Greek, reads: ''This is the image of the Hormizd-worshipping Majesty Ardashir, whose origin is of the gods.'' 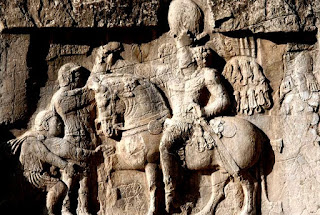 Sassanid king Shapur I of Iran in this relief at Naqsh-e Rostam, celebrats his victories over the Roman emperor Publius Licinius Valerianus , City of Marvdasht , Iran. According to Shapur's records:


"Just as we were established on the throne, the emperor Gordianus gathered in all of the Roman Empire an army of Goths and Gemans and marched ... against us. On the edges of Assyria,... there was a great frontal battle. And Gordianus Caesar perished, and we destroyed the Roman army. And the Romans proclaimed Philip emperor. And Philip Caesar came to us for terms, and paid us 500,000 denars as ransom for his life and becme tributary to us". 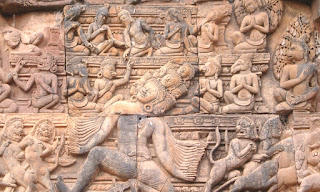 Relief at the temple Banteay Srei in Angkor, Cambodia, depicting a religious scene. It is dedicated in 967 A.D. to the Hindu god Siva. In the middle of the scene stands the ten-headed demon king Ravana. He is shaking the mountain in its very foundations as the animals flee from his presence and as the wise men and mythological beings discuss the situation or pray. 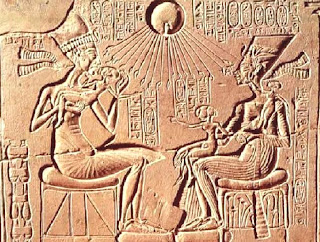 This shrine stela from the early part of the Amarna Period depicts an intimate family moment of Pharaoh Ankhenaten, his wife Nefertiti, and Princesses Meretaten, Mekeaten, and Ankhesenpaaten worshiping the Aten as a family. While Akhenaten leans forward to give Meretaten a kiss, Mekeaten plays on her mother's lap and gazes up lovingly. At the same time Ankhesenpaaten, the smallest, sits on Nefertiti's shoulder and fiddles with her earring. At the top of the composition, the sun-god, Aten, represented by a raised circle, extends his life-giving rays to the Royal Family.

The Borobudur Temple Compounds is one of the greatest Buddhist monuments in the world, and was built in the 8th and 9th centuries AD during the reign of the Syailendra Dynasty. The monument is located in the Kedu Valley, in the southern part of Central Java, at the centre of the island of Java, Indonesia.

The main temple is a stupa built in three tiers around a hill which was a natural centre: a pyramidal base with five concentric square terraces, the trunk of a cone with three circular platforms and, at the top, a monumental stupa. The walls and balustrades are decorated with fine low reliefs, covering a total surface area of 2,520 m2. Around the circular platforms are 72 openwork stupas, each containing a statue of the Buddha.

The vertical division of Borobudur Temple into base, body, and superstructure perfectly accords with the conception of the Universe in Buddhist cosmology. It is believed that the universe is divided into three superimposing spheres, kamadhatu, rupadhatu, and arupadhatu, representing respectively the sphere of desires where we are bound to our desires, the sphere of forms where we abandon our desires but are still bound to name and form, and the sphere of formlessness where there is no longer either name or form. At Borobudur Temple, the kamadhatu is represented by the base, the rupadhatu by the five square terraces, and the arupadhatu by the three circular platforms as well as the big stupa. The whole structure shows a unique blending of the very central ideas of ancestor worship, related to the idea of a terraced mountain, combined with the Buddhist concept of attaining Nirvana.
The Temple should also be seen as an outstanding dynastic monument of the Syailendra Dynasty that ruled Java for around five centuries until the 10th century.

The Borobudur Temple Compounds consists of three monuments: namely the Borobudur Temple and  two smaller temples situatued to the east on a straight axis to Borobudur. The two temples are Mendut Temple, whose depiction of Buddha is represented by a formidable monolith accompanied by two Bodhisattvas, and Pawon Temple, a smaller temple whose inner space does not reveal which deity might have been the object of worship. Those three monuments represent phases in the attainment of Nirvana.

The temple was used as a Buddhist temple from its construction until sometime between the 10th and 15th centuries when it was abandoned. Since its re-discovery in the 19th century and restoration in the 20th century, it has been brought back into a Buddhist archaeological site.

The original materials were used to reconstruct the temple in two phases in the 20th century: after the turn of the century and more recently (1973-1983). Mostly original materials were used with some additions to consolidate the monument and ensure proper drainage which has not had any significant adverse impact on the value of the property. Though the present state of Borobudur Temple is the result of restorations, it retained more than enough original material when re-discovered to make a reconstruction possible.

Nowadays the property could be used as a Buddhist pilgrimage site. Its overall atmosphere is, however, to a certain degree compromised by the lack of control of commercial activities and the pressure resulting from the lack of an adequate tourism management strategy.

Go to the next chapter; Chapter 24 - Emergence of the Modern Print, Poster Design, A History of Typeface, and A History of Book Covers