Chapter 30 -- Posters and Cult of Persnality

A comparison of these British propaganda posters of the Second World War relative to those of the other belligerent countries under tyrannical dictatorships would be somewhat revealing. The British posters depict the war time Prime Minister Winston Churchill as a rather thoughtful leader with a quiet determination. Whereas, in the propaganda posters of the Soviet Union under Lenin or Stalin, Nazi Germany under Hitler, and Fascist Italy under Mussolini, the leaders are depicted in exaggerated theatrical postures in order to create a cult of personality. 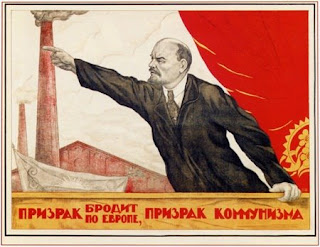 Throughout history, conquerors, warriors, and kings either claimed to be God, like Alexander the Great, or Pharaohs of Egypt, or in more recent times demanded to be almost worshiped as a consequence of their divine right to govern like Luis of France, the Tzar of Russia, or the Kaiser of Germany . However, with the spread of enlightenment and democratic ideas the leaders of democratic countries had to accept the freedom of speech and tolerate the most severe of criticisms from the populace and the opposition parties. The aura of a leader's venerability had diminished, but this wasn't the case for totalitarian regimes. Dictators need to cultivate a cult of personality either because of sheer vanity or a genuine concerns for their legitimacy in exerting their unchecked power. 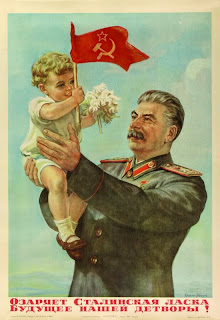 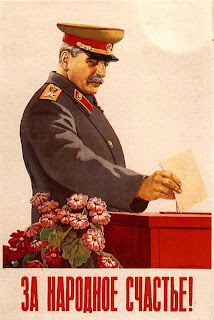 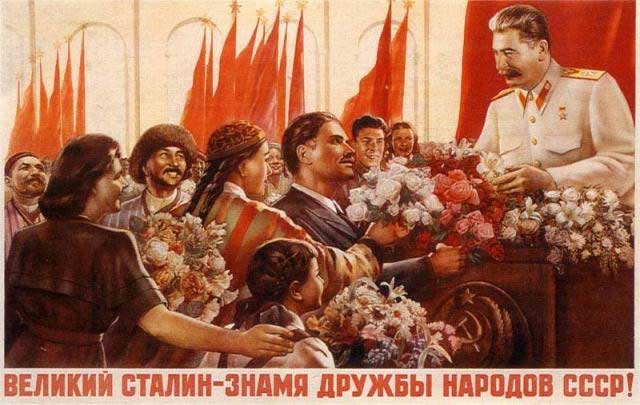 Cult of personality is based on the convincing of the populace by a leader that she or he is endowed with a mysterious and supernatural gift of noble authority. Accordingly, it reflects a power relationship of command and obedience based on the belief of both leader and followers in the leader’s extraordinary qualities. As Weber notes,

In charismatic relations people no longer obey customs or laws, instead, the followers submit to the imperious demands of a heroic figure, whose orders are legitimated not by logic, nor by the hero’s place in ascribed hierarchy, but solely by the personal power to command of the charismatic individual. 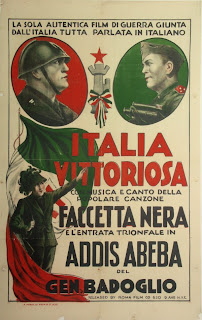 
In the last two centuries, posters have proved to be a potent means for portraying a dictator as a wise leader, a benevolent and altruist father figure and an omnipotent hero. Such portrayal has been all too-common in the post war period, with communist China under Mao, Chile's Pinochet, North Korea's Kim Il Sung, and many of the other third world's totalitarian regimes. 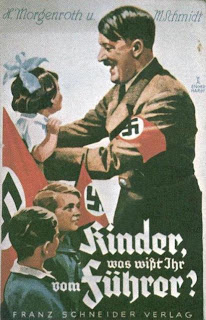 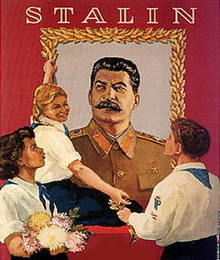 Nikita Khrushchev the Soviet leader in his 1956 "Secret Speech" to the 20th Party Congress provided a glimpse into the cult of personality of Stalin,


Comrades, the cult of the individual acquired such monstrous size chiefly because Stalin himself, using all conceivable methods, supported the glorification of his own person. . . . One of the most characteristic examples of Stalin's self-glorification and of his lack of even elementary modesty is the edition of his Short Biography, which was published in 1948.


This book is an expression of the most dissolute flattery, an example of making a man into a godhead, of transforming him into an infallible sage, "the greatest leader," "sublime strategist of all times and nations." Finally, no other words could be found with which to lift Stalin up to the heavens. We need not give here examples of the loathsome adulation filling this book. All we need to add is that they all were approved and edited by Stalin personally and some of them were added in his own handwriting to the draft text of the book.


This power relationship between the leader and his followers is also observable in the following posters of Hitler, Stalin and Mao.

The caption on the Stalin poster on the right hand side reads: "Forwards, let's crushingly defeat the German aggressors and expel them from the borders of our Motherland!". The poster on the left by E. Mirzoev, 1938, depicts a giant Stalin amid Azerbaijani peoples celebrating the anniversary of the introduction of the new constitution of the Soviet Union.

As can be seen here in Hitler's poster in the center which was issued shortly after the Anschluß with Austria in 1938, he is depicted as the one and only leader,  the caption reads "One People, One Reich, One Führer." The text of  the other poster on the left,  from 1940 depicting a young boy in the foreground reads: "Youth Serves the Führer. All 10-year-olds, to the Hitler Youth." Of course, membership in the Hitler Youth had become mandatory in 1936. The Hitler poster on the left which urged a "Yes" vote on his April 1938 referendum was even more explicit in this power relationship, the text said: "Führer, we will follow you."

In 1934, Xanti Schawinski, a Swiss-American from the Bauhaus collective, created the propaganda poster  in the left for Mussolini.  which uses photomontage and half-tone printing. To promote Mussolini's cult of personality, Schawinski used a crowd of hundreds to create the half-tone “dots” of Il Duce ’s body. This technique elevated the dictator to a God like status as Mussolini looks down at the crowd. 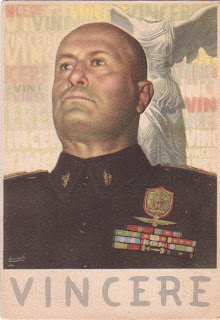 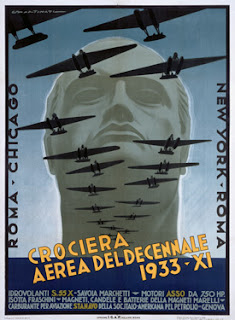 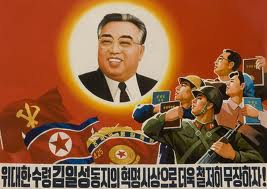 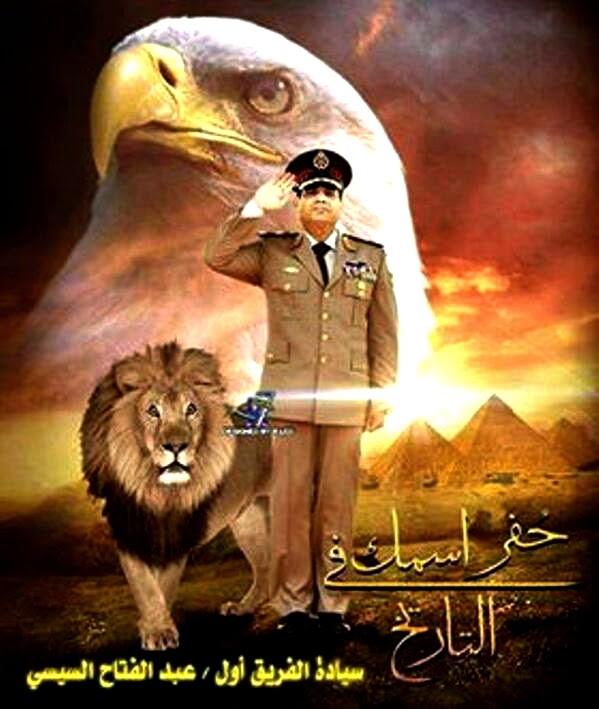 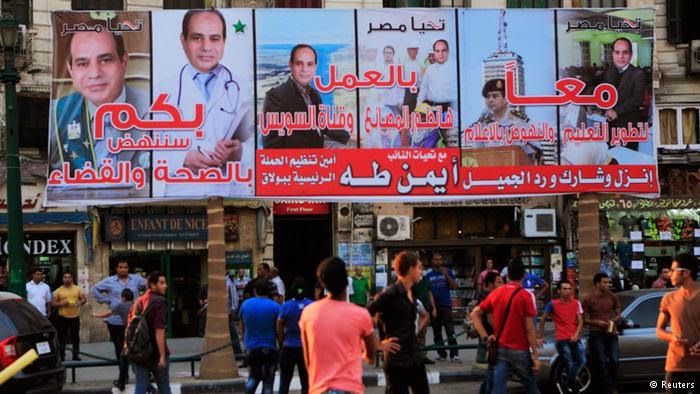 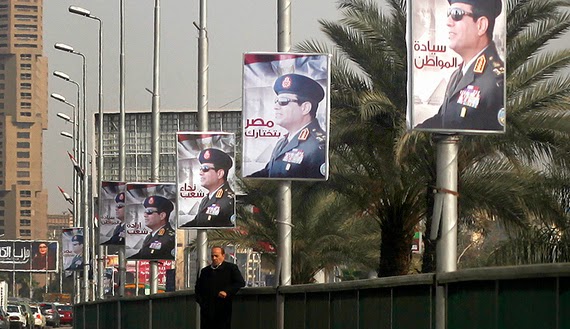 Go to the next chapter; Chapter 31 - The German Jugendstil and Plakatstil Movements