Chapter 46: A history of the American Movie Posters


I have to analyze the problem. What is the movie about? What is the story about? What is it trying to say? Whatever is the style of the movie? What kind of audiences I want to appeal to -- so that they get some sort of inkling about what the film is gonna represent. We try not to dissuade them from the realism of what the story is, and yet, we don't want to tell them too much.
Usually, we started by getting people in the department to do some logos, designs of what the lettering should look like. I usually read the scripts or I'll go to see the footage of the movie. I'll try to decide what would be the most marketable thing to say about the movie, and how to project it into a piece of art. Most of these things we did by hand and do the lettering and positioning and pasted all together and if we had to make a change we had to reap it apart and start over, With a computer you just almost press button and move things into place.


Perhaps the very first movie poster was the one created by Jules Cheret, in 1890, for a short film called Projections Artistiques. The lithograph poster depicted a young girl holding a poster announcing the times of the show. Two years later, he created another poster for Emile Reynaud's Theatre Optique called Pantomines Lumineuses.

However, it is the poster for L'Arroseur Arrosé that is considered the first poster for a featured film. The poster was designed by Marcellin Auzolle, Shot in Lyon in the spring of 1895, the film portrays a simple practical joke in which a young boy steps on a gardener's hose while he watering his plants. When the gardener inspects the hose, the boy releases the water. The stunned gardener, whose hat is knocked off, chases the culprit, and after catching him administers a spanking.

In 1903, Edwin S. Porter, created the first American motion picture The Great Train Robbery, which proved to be a big hit, and its popularity led to the establishment of "nickelodeons," the early movie theatres, the first of which was established in 1905 in Pittsburgh, and by 1907 their numbers surged to almost 5,000 throughout the United States. Perhaps the very first movie poster was the one created by Jules Cheret, in 1890, for a short film called Projections Artistiques. The lithograph poster depicted a young girl holding a poster announcing the times of the show. Two years later, he created another poster for Emile Reynaud's Theatre Optique called Pantomines Lumineuses. However, it is the poster for L'Arroseur Arrosé that is considered the first poster for a featured film. The poster was designed by Marcellin Auzolle, Shot in Lyon in the spring of 1895, the film portrays a simple practical joke in which a young boy steps on a gardener's hose while he watering his plants. When the gardener inspects the hose, the boy releases the water. The stunned gardener, whose hat is knocked off, chases the culprit, and after catching him administers a spanking.

By the end of the first decade in 20th century, there were many movie studios established in the US, and the most prominent among them were Biograph, Essanay, Kalem, Kleine, Lubin, Selig and Vitagraph. The movie posters were created by the studios art departments, whicg they shipped the original artwork to the lithographers, who handled the making of the printing plates. The lithographers, then sent their plates to the printers who used them to print the posters. Some of the major lithographers were: Donaldson Print Company which printed the American Entertainment Company stock poster of 1900, Miner Litho Company which was used by the United Artists. Thomas Edison who considered the motion picture one of his inventions, in an attempt to restrict his competition created the Motion Picture Patents Company, which was a cartel made up of the major film studios. One of the first acts of the newly-formed cartel was to set standards for advertising materials.

The early movie posters rarely, if at all, provided any information about the actors on the posters. This was due to the fact that the film producers were concerned that such publicity would contribute to the propagation of the stars fame, and would encourage them to demand higher wages. However, when Carl Laemmle, poached Florence Lawrence from Biograph studio, things began to change. Laemmle, the father of Universal Pictures, was reputedly the most good-natured and least neurotic of the studio bosses. Laemmle had established a film distribution business thatlater became one of the largest in America. In 1909, he produced his first picture, Hiawatha (1909), a 15-minute version of Henry Wadsworth Longfellow's famous poem. By this time Laemmle had become a leader of the "Independents," producers and distributors who defied the would-be monopolists of Thomas Edison's Patents Company. As a publicity stunt Laemmle started a rumor that the lovely "Biograph Girl" was dead and then published a full page ad in a St. Louis newspaper stating that he had "nailed a lie" and would be presenting Florance Lawrence in St. Louis. This resulted in gathering of a huge crowd to see the "Biograph Girl" alive. The publicity made Lawrence famous and increased Leammle's profits and consequently, other companies followed suit. Lawrence left IMP and moved to Lubin Studios the following year. From then on studios understood the power of stars in making a film profitable. Since then the posters were designed to take the maximum advantage of the star power, and the typographic design and the size of the fonts began to reflect the relative significance of the 'leading lady" and "leading man." In return the stars agents demanded clauses in their contracts that would specify the size and placement of their client names on the movie posters.

The art directors in the movie studios conceptualized what a movie needed. The studios usually had some preconceived ideas about what they wanted in a poster before the sketching began. The goal was to market the movie to the audience, promising an interesting story without completely giving the story away. Most studios frowned upon the art directors who in their views were artificial or slick about the the way they worked. They wanted the director to concentrate on the story, and rarely wanted to know what an art director can show. Generally, the graphic designers were given a rough cut of the movie, and after watching it, they were asked to draw a few different designs based on their impressions of the film. The artists were encouraged to draw their interpretation of the movie and shy away from just recreating one of the frames. After the initial designs were done, they were edited from various marketing perspectives, often by different artists than the originals. Gradually a set of visual parameters were developed and these were etched into the collective consciousness of the industry, determining the "truth" of the movie and such criteria became part of the culture of the studios art departments. As Michael Bierut, a graphic design critic has argued; a static image, in theory, can’t possibly have the same power as a 90-minute film, yet a poster designer should somehow encapsulate the adventure a viewer going to see in 90 minutes. Thus, the designer needs to find a way to match the movie to the right style. “In a way, that is the opposite of what a film critic would call the auteur theory". A good poster designer should manage to be a complete chameleon so that it kind of obfuscates his own handwriting on the poster.

The original piece of artwork for posters, created by the graphic designers of the film studios who remained mostly anonymous in the early decades, was called "reflective" or "hard" art, the designers also created a a "mechanical" art, which depicted the location of titles and credit information on the posters. The early lithographers made their plates from limestone slabs, and thus their technique was called Stone Lithography. Soon they substituted zinc. They then sent these plates to printer, or if they has a printing press they themselves printed the posters. The printed posters then were sent to studio exchanges, independent poster exchanges, or later National Screen Service. According to Edison's standards, the size of a movie poster was set at 27"x 41". Each studio had its own stock poster borders printed in either two or three colors. A white panel at the center printed the title and a synopsis of the movie's plot, and often included a photograph from a scene in the movie.These posters were called the "one sheet," and were placed prominently in glass display cases inside and outside of movie theatres.

The introduction of the of new color offset lithography printing technique that was developed by Morgan Litho Company dramatically changed the artistic quality of posters, and shifted the emphasis from the illustration to photography. Lithography is based on the principal that oil and water do not mix. Thus lithographic plates undergo chemical treatment that render the image area of the plate oleophilic (oil-loving) and therefore ink-receptive. The non-image area are rendered hydrophilic (water-loving). During printing, dampening solution, which consists primarily of water with small quantities of isopropyl alcohol and other additives to lower surface tension and control pH, is first applied in a thin layer to the printing plate and migrates to the hydrophilic non-image areas of the printing plate. Ink is then applied to the plate and migrates to the oleophilic image areas. Since the ink and water essentially do not mix, the dampening solution prevents color to affect the non-image areas of the plate. In the offset printing technique ink is applied to the printing plate to form the "image" and then transferred or "offset" to a rubber blanket . The image on the blanket is then transferred to the paper to produce the printed product. While not as colorful as the stone lithography posters, the color offset process produced sharper images. Over the next twenty years, the two processes would continue to be used. However, by the 1940's, color offset would replace stone lithography for all poster printing. 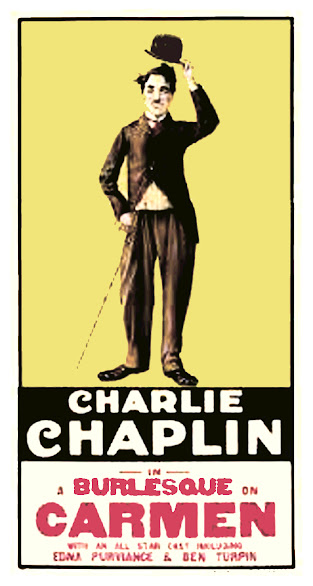 Ater Chaplin left Essanay, the company inserted discarded material and created new scenes, extending  Chaplin’s burlesque of Cecil B. DeMille’s popular film version of Carmen (1915),  with Edna Purviance as the seductress Carmen. Chaplin put forward an unprecedented claim of the moral rights of artists, suing Essanay on the grounds that the expanded version would damage his reputation with the public. Although Chaplin lost the court battle, he later wrote that Essanay’s dishonest act “rendered a service, for thereafter I had it stipulated in every contract that there should be no mutilating, extending or interfering with my finished work.”


The 1930's era is dubbed the "Golden Age of Movies," as some of most memorable films in movie history in various genres, including musical , western , gangster and horror movies were released during this decade. As the production of films increased, some graphic designers were given the chance to experiment with various styles and various typographies. 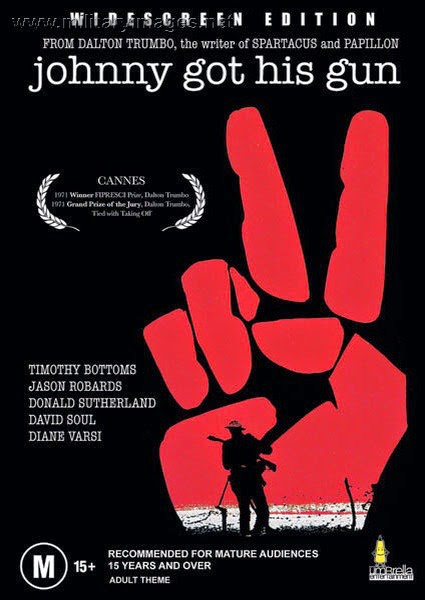