The work of art in Alchemy literature, using wide-ranging symbolism, methaphorical concepts, and surreal legends to express the association of chemical and physical concepts with esoteric and mystic ones constitutes a fascinating genre of visual communication design.

At its core exhibiting a very fine balance between metaphysical aspects of life and reality of the chemical processes, which not only invites  viewers to explore spiritual processes, but also suggests , most often fraudulent and sometimes genuine, efforts  to resolve some actual scientific challenges to transmute a base metal into gold or to find a substance that could eradicate death and provide immortality.

Many Europeans consider the Persian prophet Zoraster as the "inventor" of both magic and astrology. However, in the Hellenic heritage, Zoaraster was the "prophet and founder of the religion of the Iranian peoples" (e.g. Plutarch Isis and Osiris 46-7, Diogenes Laertius 1.6-9 and Agathias 2.23-5), "the rest was mostly fantasy." He was assumed of belonging to a deeply- ancient past, six or seven millennia BC, and was presented as a sovereign of Bactria, or a cobbler (or a teacher) living on the shores of Babylon. Similar to the ancient Rig Veda that contains hundreds of verses concerning soma, how to press and sieve plants, how to store it and drink it, in order to release its exhilarating and intoxicating effect, Zoroasterin literature is partial to huoma, one of the two trees in the original garden of paradise, a tree with the gift of immortality.


Deriving from the alchemical practice and its symbolism, underpinned by an extensive literature rooted in  four papyrus rolls of the Asteroskopita (or Apotelesmatika) dealing with astrology or one lost papytus roll of Peri lithon timion (On Virtue of Stones) among other of alleged books of Zoroaster, including his  lost works that appear in many fragments in the works of others, that circulated the Mediterranean world (from the 3rd century BC), he was perceived as the founder the magi and of their magic arts. As well, Zoroaster's patron King Hystaspes and his disciple Ostanes who was described by the 4th century BC Hermodorus (apud Diogenes Laertius Prooemium ) as being a magus in the long line of magi descending from Zoroaster, were considered as practitioner of “magic” – Greek magikos. Pliny the Elder named Zoroaster as the inventor of magic, but that Ostanes was the first writer of it (Natural History 30.2.3, the 1st-century). "This Ostanes," so Pliny reports, was a Persian magus, who had accompanied Xerxes in his invasion of Greece, and who had then introduced magicis the “ the most fraudulent of the arts, ” to that country.

By the end of 1st century AD Ostanes is cited as an authority on alchemy, necromancy, divination, and on the mystical properties of plants and stones. Both his legend and literary output attributed to him increased with time, and by the 4th century he had become one of the great authorities in alchemy.


The 18th century occultist Francis Barrett wrote of the influence of Zoroaster on the great and noble art of alchemy, in the clearest of terms:


Alchymy, the grand touchstone of natural wisdom, is of divine origin: it was brought down from Heaven by the Angel Uriel. Zoroaster, the first philosopher by fire, made pure gold from all seven metals; he brought the sun ten times brighter from the bed of Saturn, and fixed it with the moon, who thereby copulating, begot numerous offspring of an immortal nature, a pure living spiritual sun, burning in the refulgency of its own divine light, a seed of sublime and fiery nature, a vigorous progenitor.

This Zoroaster was the father of alchymy, illumined divinely from above; he knew every thing, yet seemed to know nothing; his precepts of art were left in hieroglyphics, yet in such sort that none but the favorites of Heaven ever reaped ben­e­fit thereby. He was the first who engraved the pure Cabala in most pure gold, and when he died, resigned it to his Father who liveth eternally, and yet begot him not: that Father gives it to his sons, who follow the precepts of Wisdom with vigilance, ingenuity, and industry, and with a pure, chaste, and free mind. — Francis Barrett, The Magus, (1801) 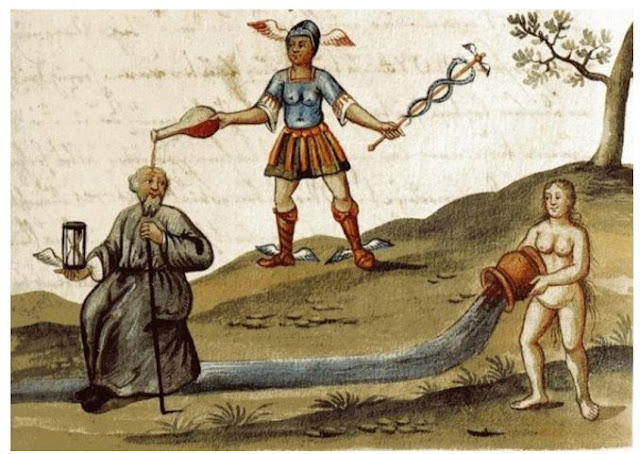 From a transcendent aspect of alchemy, the "philosopher's stone", represents the most palpable image for an inner potential of the mind to advance from the limitation of a state of unawareness and naïveté (symbolized by the base metals) to a state of awareness and perfection (symbolized by gold). In this interpretation, mystical development, the transmutation of metals, and the refinement and enlightenment of the soul were understood as the ultimate purpose of a life worth living.

Alchemists employed an extensive assortment of mysterious substances which are known to modern scientists for their chemical qualities, including cinnabar (mercuric sulphide), spiritus fumans (satanic chloride), saccharum saturni (sugar of Saturn or lead acetate), sal ammoniac (ammonium chloride), oil of vitriol (sulphuric acid), aqua regia (nitric acid and hydrochloric acid) and aqua fortis (nitric acid). Trying to retain secrecy for various reasons, they worked under the cover of many cryptic and sophisticated procedural protocols, and a system of mysterious symbols as are shown in the following chart.


According to Carl Jung the philosophical tree of the Arab alchemists, producing Elixir, was related to the Haoma tree that grows in the cosmic ocean of the Zoroastrian creation myth.


We may note the curious fact that a lizard is concealed in the tree: “The evil spirit has formed therein, among those which enter as opposites, a lizard as an opponent in that deep water, so that it may injure the Haoma ,” the plant of immortality. In alchemy , the spiritus mercurii that lives in the tree is represented as a serpent, salamander, or Melusina. — Jung, Psychology and Alchemy


The concept of Transmutation of Metals in alchemy stems from the Geber (Jabir ibn Hayyan) theories, an 8th century Islamic alchemist, born in Tus, Iran. Assuming that every metal was a combination of the Aristotelian four elements each consisting of four properties, two of them interior and two exterior, Geber hypothesized that the transmutation of one metal into another could be effected by the rearrangement of its basic properties. Given that according to the Aristotle theory fire was both hot and dry, earth cold and dry, water cold and moist, and air hot and moist the transmutation would be mediated by a substance, elixir in Arabic, in the form of a dry powder, made from the "philosopher's stone". The stone was believed to have been composed of a substance called carmot.

Geber's theory and the concept of the philosopher's stone may have been inspired by the knowledge that metals like gold and silver could be hidden in alloys and ores, from which they could be recovered by the appropriate chemical treatment. Geber himself is believed to be the inventor of aqua regia, a mixture of muriatic and nitric acids, which is one of the few substances that can dissolve gold (and is still often used for gold recovery and purification)

The Philosopher's Stone, the White Stone by the River, the Sword in the Stone, all refer to a legendary substance, that was supposed to transform base metals into gold. It was sometimes believed to be an elixir of life, useful for rejuvenation and possibly for achieving immortality. For a long time, it was the most sought-after goal in Western alchemy. In the view of spiritual alchemy, making the philosopher's stone would bring enlightenment upon the maker and conclude the Great Work. It is also known by several other names, such as 'materia prima.'

Clavis Artis is the title of a manuscript of alchemy published in Germany in the late seventeenth or early eighteenth century attributed to Zoroaster (Zarathustra).

The work, in three volumes of medium format, uses a German Gothic cursive font  and is accompanied by numerous illustrations in watercolor, which depict various symbolic images rlated to alchemy. There are also some pen sketches depicting laboratory instruments. Only  few copies of the manuscript are located in various libraries, of which just two are illustrated.


The best known copy is the Library of the National Academy of the Lincei in Rome, where it is listed as MS. Verginelli-Rota 15, 16, 17. Another copy is  in Trieste at the Public Library Attilio Hortis, which is cataloged as MS-2-27. A different version, in a single volume and without illustrations, is located at the Bavarian State Library, of Monaco of Bavaria. Unfortunately, another  copy of the manuscript at the Duchess Anna Amalia Bibliothek, in Weimar, was burnt in the 2004 fire that hit the German library.  Sine the second half of the 1980s, after some of the Clavis Artis images appeared in books and  alchemy  websites, they  have become  subject of  various studies by many graphic designers.


Prior to their recent rediscovery, virtually no information about these copies were available and as a result there is a lack of much information  about the author and the origin of the manuscript.  References to the Rosae et Aurea Crucis seem to indicate a connection to Order of the Golden and Rosy Cross, or Rosicrucians (Orden des Gold- und Rosenkreutz). The first mention of this order may be traced to the early the 18th century, when Samuel Richter in his nomen mysticum Sincerus Renatus  published The True and Complete Preparation of the Philosopher’s Stone of the Brotherhood from the Order of the Golden and Rosy Cross.

It is not yet clear that the Order which operates on lodge system and whose emblem is cross with a single rose in the center, was a product of Richter's imagination or  if there actually existed a historical group. But it is clear that its anti‐papal tone had gradually ceased during the 17th century, and it focused more and more on the laboratory alchemy. It is probable that the text of Clavis Artis  is actually the translation or adaptation of a more ancient manuscript of Islamic origin by an alchemist and Rosicrucian, with the images that are of more recent origin.


From the title page of Robert Fludd's Summum Bonum, published at Frankfurt in 1629, has become well known as a Rosicrucian symbol. It has a seven fold symmetry, seven layers of petals and its stem is formed in the shape of a cross. The engraver, Matthieu Merian, had used a similar grouping of symbols fourteen years earlier in an emblem book.

This exact metaphor of the honey bee as the alchemist and the hive as the alchemical retort seems to have entered the symbolic vocabulary of the sixteenth and seventeenth centuries through a rediscovered and influential work of the third century Neoplatonist Porphyry, De Antro Nympharum (On the Cave of the Nymphs). In this short essay, Porphyry examined several verses from the thirteenth book of Homer's Odyssey and showed how they were to be interpreted as an allegory of the immortal soul's passage through mortality and on to liberation. The bees and hive are among the objects encountered in this "cave of generation.


In Bibliotheca chemica : a catalogue of the alchemical, chemical and pharmaceutical books published in London in 1906, John Ferguson, a Scottish chemist and bibliographer argued that it is likely that Hermann Fichtuld the founder of the Order of the Golden and Rosy Cross was right in believing that the author of Clavis Artis is  Abrahami Eleazaris. However,  he is a fictitious author of an ancient work on alchemy published in Leipsic in 1760, bearing the title "R. Abrahami Eleazaris Uraltes Chymisches Werk." The real author seems to have been Julius Gervasius of Schwarzburg, whose name is given as the editor on the title-page of the first part.Nevertheless, the image of a man in the vestments of a rabbi who is engraved on the cover page of the book of Abraham Eleazar is very similar to that of Zoroaster. There are also some other similarities among the illustrations of the two books.