Royal decorations, military badges and medals together with lapel pins are part of visual communication conveying  various message of majesty, power , bravery and at times  pure vanity. Detachable badges in metal or cloth are a key element of military uniforms. They can be worn on a cap, collar, shoulder, arm, or cuff. They can be stitched, or attached with brass pins or ‘sliders’. They can identify the rank of the serviceman, their particular regiment or ship, qualification or specialist trade, and distinguish those with gallantry awards, long service or who have been previously wounded. Servicemen may also wear badges of larger formations (such as Brigades, Divisions or Armies), within which their unit is currently serving. Lapel Pins are worn to show affiliation with an organization or cause, they have become a new collectible trend . Exceptionally cheap to produce, custom enamel pins are bringing individual flair to hats, jackets and lapels around the world, and giving artists the chance to make their work into an affordable and collectible commodity.

The military decorations and badges  have a long history. It is known that awards in ancient times were given solely for military achievements. Daggers of gold were once more common in Assyria and Persia. Sargon, who conquered and looted the Urartean city of Musasir, listed no fewer than six as being in the treasury of Urzana, the king of Urartu. And in the later times of the Achaemenian kings of Persia, as we learn from Xenophon in the Anabasis, Cyrus the Younger, shortly before he was slain at Cunaxa (40I B.C.) trying to take the throne from his brother Artaxerxes II, presented  a golden dagger to Syennesis, the king of Tarsus, in Cilicia. The treatment of the lion heads on the dagger is entirely in the tradition of Achaemenian.   During the period of the Achaemenian empire the stylized lions,  featuring a slightly changed natural form by   minor details, became almost standard practice  so that it is composed into a neat and tidy decorative pattern.

Persians and their  Parthian cousins wore the torques or neck-ring as a badge of honor or symbol of rank. Greeks and Romans in their wars with Persians and Parthians adopted the practice of giving the torques as a military decoration. A formal award was created  in the form of the  Persian necklace which must on many occasions have been striped  as booty from the neck of a slain soldier. The Roman soldiers  did not wear  their torques in traditional Persian fashion around neck. They were usually, awarded in pairs and in the reliefs  the torques are shown as though they are attached to the cuirass on either side just below the collar bones.


Romans called these decorations  phalarae  (φάλαρον)  meaning Award. The word “phaleristic” is used to classify the science that studies orders, decorations, and their history. A phalarae was a circle or crescent shaped plaque worn by war horses, or mounted to soldiers armor, and are visible on Roman tombstones.  Also the tiara of the king of Persia was thus adorned (Aeschyl. Pers. 668).

The first organized system of military medals was created by the Romans, who developed a complex hierarchy of military honors ranging from crowns that were presented to senior officers to mark victories in major campaigns, to phalarae or metal disks bearing the Emperor's image, which were awarded to centurions and soldiers for valour in battle. Decorations were usually worn by the soldiers on parades and were generally awarded at the end of a campaign or could be added to the eagle standards for entire units. These phalarae are the ancestors of modern military medals. 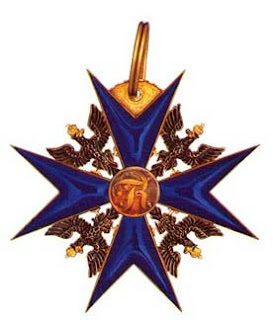 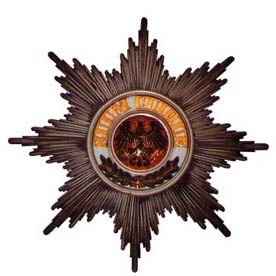 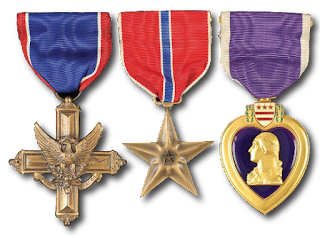 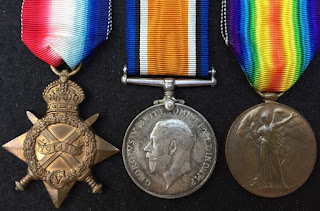 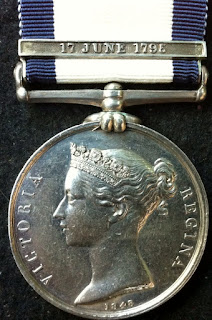 The cohesion among the orders’ members was determined by their rules, their congregation, the community and the orderliness (lat. ordo). The affiliation to an order was shown by their uniforms and insignia. In this regards, it should be said, all design of those insignias root in the pattern of the holy cross. Being a member of such a society had nothing to do with being awarded honors during those early days. Among the orders’ members, a ranking system was established and documented by different insignias.

The grand master of these orders founded multiple branches of their order societies before the downfall of Jerusalem and enhanced their political powers in all parts of Europe . Being reinforced through all their gains during the Crusades and their fast growth, the orders’ masters were coveted by almost all of the royals. This triggered the development of awarding memberships in orders.


The  Anglo-Saxon tradition of marking major military campaigns or victories with medals goes back to the reign of Elizabeth I. She issued commemorative medals to mark England's victory over the Spanish Armada in 1588. At that time and up until the 19th century, medals like these were only presented to the most senior officers engaged in a battle. The modern practice of issuing a campaign medal to participants of all ranks began during the time of Oliver Cromwell, when all members of the Parliamentary army who had participated in the Battle of Dunbar received a medal marking the occasion. The practise would not be repeated until 1815, when a medal was awarded to all members of the British forces who served during the Battle of Waterloo.

Medal design shows the talent and the skill of the most famous jewelers of their time in an impressing way. Many known names like Fabergé in Moscow or Le Maitrè in Paris are among those. Each order decoration is a mirror of the time it was made. Several processing steps led to extremely fine and intricately made jewelry consisting of several complex, joined individual parts. The cross bodies are usually made from red and yellow gold and sometimes feature  silver foil underneath the colored glass arms to enhance light reflection. The center of the medals usually depict  the family's  heraldry crescent  in finest enamel hand painting. 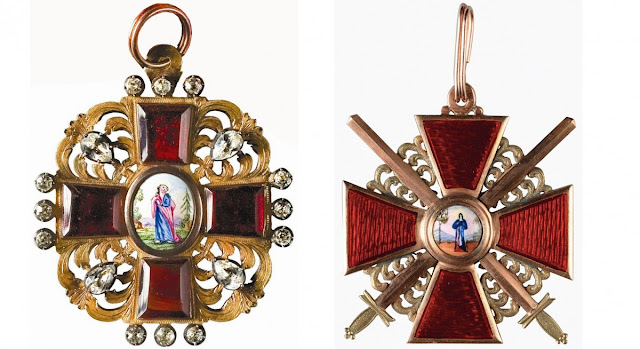 Since then enamel and lapel pins have been worn by soldiers during battle. The trend is thought to have started during the Revolutionary War and continued through to World War I. The use of enamel and lapel pins had also become very popular for politicians and political supporters during rallies and events. Whatever the process used to produce it, the heart of a lapel pin is in its design. Without the correct form, a lapel pin falls short of meeting its goal. After all, these are very small pieces. They must be designed with both preciseness and legibility in mind. 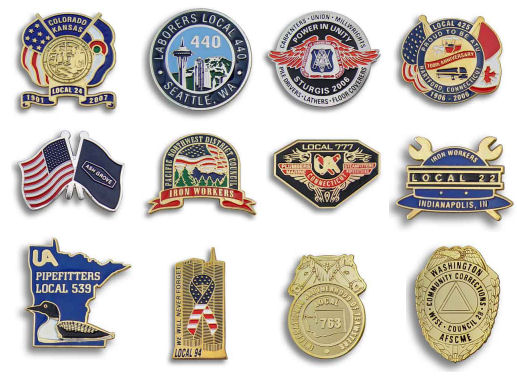 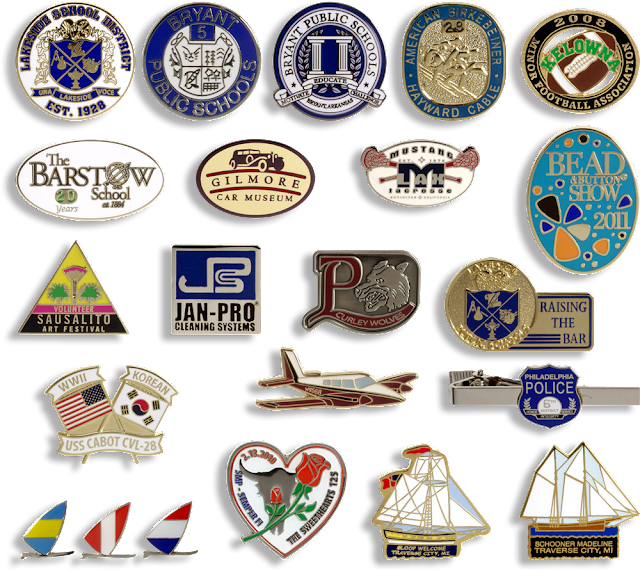 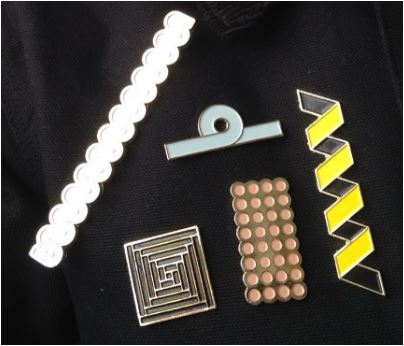 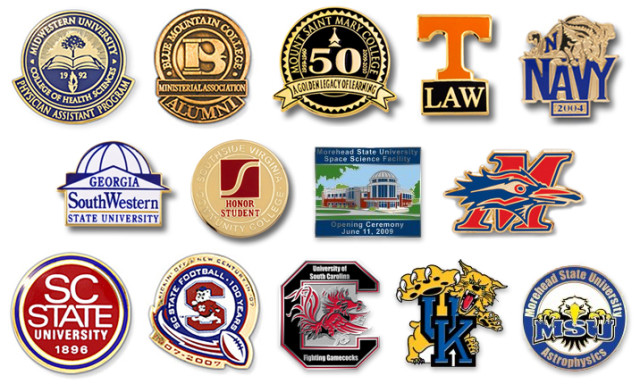 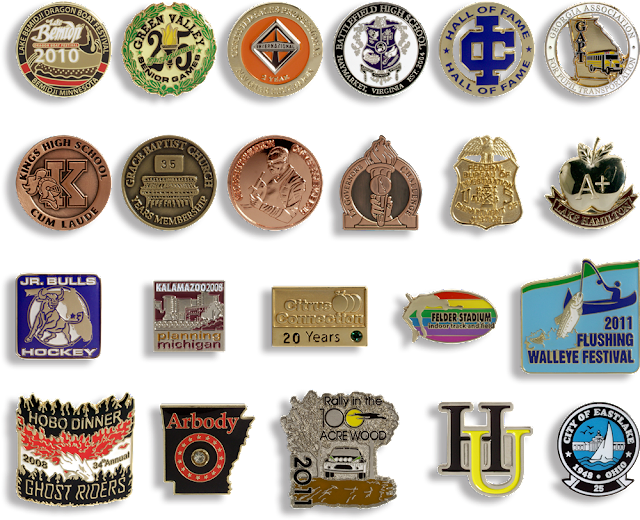 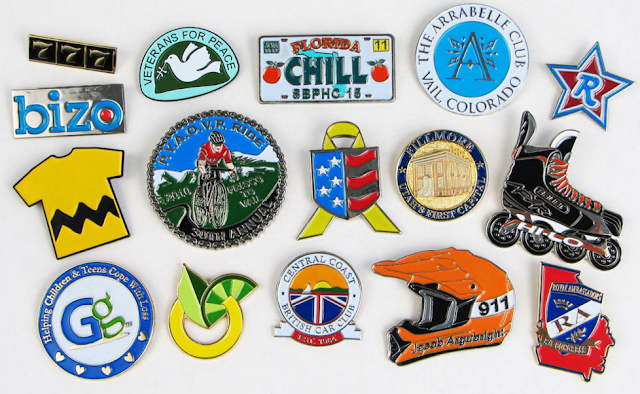 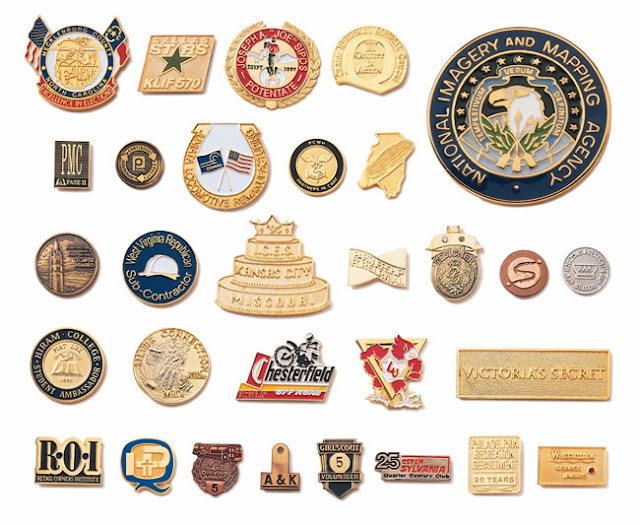