"In his Natural History, Pliny states that printing on textiles  was particularly utilized in Egypt. Printed material is only represented by fabrics of the fourth century at the earliest and continues until the Arab period. In those days, there were great textile centers such as Alexandria  Panopolis, Oxyrhynchus, Tinnis and Damietta, but regrettably we know this only from texts, because any trace of weaving shops and their fragile wooden looms has vanished. However, by studying the fabrics themselves, scholars are often able to derive their origins.


monopoly on silk mobility to the West stymied Byzantine efforts to acquire silk at reasonable costs and it wasn’t until near the end of the Sassanian Empire, around 563 AD, that Justinian in Constantinople was able to surreptitiously begin a Byzantine silk industry. The Sassanian empire ended with the Arab invasions in the middle 7th century that brought Islam to the region ending Persian rule. Famous for their textiles and especially their silk designs, which were distinct even while incorporating Sogdian and Bactrian patterns.

(...) Medieval silk vestments and even shrouds often displayed Sassanid motifs even when loomed and embroidered long after the Sassanid Empire. For example, the silk shroud of St. Sernin of Toulouse, 12th century from Al Andaluz (Moorish Spain), and now in the Cluny Museum in Paris, represents two Sassanian peacocks facing each other across a Tree of Life. Other examples include the Reliquary of St. Len at the Victorian Albert in London as well as other silk and textile fragments whose motif and style were borrowed from Sassanian art long after its own floruit was forgotten or possibly never really kown in the West.

India in particular was known for the quality of its textiles, and for centuries was involved in a brisk trade with Far and Southeast Asia. European companies worked their way into this commercial nexus in the early sixteenth century. The Portuguese were the first to arrive, having discovered a sea route from Europe to the East that allowed them to avoid the heavy taxes on goods sent overland through the Middle East. The British East India Company received its charter in 1600 and the Dutch East India Company was founded two years later. These agencies bought textiles in India for silver and gold, exchanged them for spices grown in the Malay Islands, and sold the spices in Europe and Asia. Soon Indian textiles were exported directly to Europe, where they became highly fashionable. The popularity of Indian textiles is evidenced in the number of words that have made their way into English: calico, pajama, gingham, dungaree, chintz, and khaki. The luxury textiles coveted for centuries are now collected in museums, where they are often grouped and studied on the basis of their patterns of production.

Safavid textiles are praised as the pinnacle of Iranian loom weaving. When the Safavids came to power at the turn of the sixteenth century, the Iranian textile industry was already well developed in the production and sale of woven silk textiles and rugs as well as raw silk for export. The textile industry consisted of urban workshops producing textiles independently, provincial centers focusing on rug weaving, and small farms cultivating silk in the Caspian region. As the Safavids set up their capital cities of Tabriz, Qazvin, and finally Isfahan, the textile industry became centralized and was swiftly incorporated into the national economy, creating an expansive revenue stream.


Under the reign of Shah Tahmasp (1524–76), royal workshops were established primarily to service the court, while raw silk continued to be produced and sold to the state by independent producers from northern provinces such as Gilan. In the seventeenth century, Shah cAbbas I (r. 1587–1629) centralized the Iranian economy by developing a state monopoly over the silk trade, controlling production in the Caspian provinces, where the bulk of the raw material was produced. In addition, the state regained control of ports in the Persian Gulf from Portuguese occupation, facilitating maritime trade and rerouting silk trade away from areas under Ottoman jurisdiction. When the Safavid capital was established in Isfahan in 1598, Armenian textile workers were relocated to the neighborhood of New Julfa, in close proximity to Shah cAbbas' palatial complex. This local textile industry included dyers, weavers, and embroiderers producing luxury textiles mainly for export under the supervision of the state. Private workshops in urban centers such as Yazd and Kashan continued to produce textiles for sale within and beyond Iranian borders, and are especially known for velvet and lampas-woven luxury silks.

During the Renaissance, luxurious fabrics made of silk and precious metal threads counted among the most valuable items owned by both individuals and the Church. As an expression of power, wealth, and taste, specially woven fabrics incorporating a family coat-of-arms or other motifs associated with the family’s reputation were particularly valuable. Such fabrics were used in secular dress, religious vestments, and interior furnishings. The precise meaning of some of the motifs that held special significance during the Renaissance has been lost over time. But the fact remains that these luxurious textiles were the most highly valued products of the talented silk weavers of the Italian peninsula, and were exported all over Europe, as well as to the Ottoman empire. The consumption of the most expensive fabric was confined to the upper classes who could afford them, but the production and marketing of the fabrics involved many more people at almost all levels of society. The period from about 1400 to 1600 was one in which the weavers of the Italian peninsula, as well as Spain, excelled at producing spectacular patterned velvet textil.


The Industrial Revolution played a major role in transforming the production and consumption of textiles in nineteenth-century Europe. The importance of the textile industries to the development of the factory system cannot be overestimated. Many of the major inventions of this period applied directly or indirectly to the textile industries, from the spinning jenny (invented by James Hargreaves in 1764), which automated the preparation of weft threads for the loom, to the steam engine (perfected by James Watt in 1775), which was applied to the power loom. The end result was that both plain and patterned textiles could be produced more quickly and cheaply, making mass-produced fabrics for dress and furnishings available to a large portion of society. While consumers benefited from a greater variety of goods at lower costs, textile workers often suffered as the factories replaced many skilled weavers with unskilled workers at lower wages. France continued to be the leading source for luxury dress and furnishing silks during the nineteenth century, as it had been throughout the eighteenth century, while England's technical prowess enabled the country to excel at mass production for the middle-market consumer.

Competition between French and English textile manufacturers and designers was fueled by the international exhibitions. France responded to the success of the London's Great Exhibition of 1851 by organizing its own in 1855. It remained the leader in costume and interior fashions, while the English sought to capture a larger share of the luxury goods market. French textile designers were traditionally better trained and earned more money than their counterparts elsewhere in Europe; French studios existed which specialized in designs for export. The Victoria and Albert Museum was founded in 1852 as a repository for art objects intended to serve as inspiration to the design community in addition to serving the public at large. Three French museums, the Musée Historique des Tissus in Lyon, Musée des Arts Décoratifs in Paris, and Musée de l'Impression sur Étoffes in Mulhouse (in the cotton-printing center of Alsace) were all founded between 1856 and 1863 with goals similar to those of the Victoria and Albert Museum. 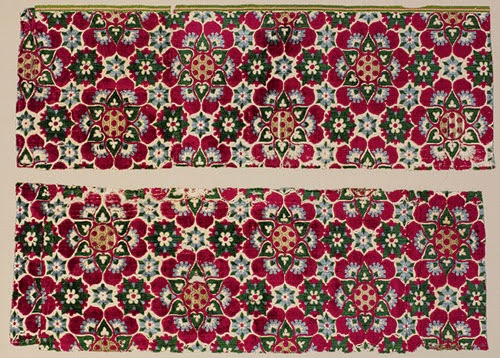 Patterned silk velvet was the most expensive and prestigious of all woven textiles, but other patterned silks, such as damasks and brocades, were costly as well. The city-states of the Italian peninsula produced the majority of European luxury silks during the Middle Ages and the Renaissance, and continued to dominate the production of luxury textiles well into the seventeenth century. During the fifteenth and sixteenth centuries, Venice and Florence were renowned for their sumptuous Renaissance velvets incorporating gold and silver threads with large floral patterns after the pomegranate motif. During the seventeenth century, Genoa began producing polychrome floral velvets with large-scale patterns primarily intended for wall covering and furniture. This so-called Genoa or jardinière velvet (38.182.2) remained the preferred choice for formal interiors through the eighteenth century, even as fashions in dress began to call for lighter fabrics.

A sizeable silk-weaving industry existed in France from the fifteenth century, centered in the city of Tours. Tours had the advantage of being close to Paris and the primary French consumers of luxury textiles: the court and nobility. Under King Louis XIV (r. 1643–1715), the superintendent of finance Jean-Baptiste Colbert (1619–1683) launched an ambitious scheme to organize and promote the textile industries in France, both at home and abroad. Lyon, which had previously been an important trade center for merchants importing Italian textiles, emerged as the center of the reorganized industry, and subsequently overtook Tours as the largest French producer of luxurious silk textiles.

Silk weaving in Lyon was supported by other subsidiary crafts such as spinning, dyeing, and the printing of special paper for textile design drawings, in addition to the presence of merchants who supplied materials and sold the finished products. It has been estimated that more than one-third of the population of Lyon, almost 15,000 workers, was involved in the silk industry either directly or indirectly by the late eighteenth century.

The revocation of the Edict of Nantes in 1685 encouraged large numbers of Huguenot (French Protestant) artisans to relocate from France to England, the Netherlands, and Germany. The area of Spitalfields, east of London, was one of the main beneficiaries of this influx and subsequently became known for its fine dress silks. In the mid-eighteenth century, English silk designers distinguished their work from the prevailing French taste for generalized floral types (69.79.3) by producing spare floral patterns often based on actual botanical specimens or engravings (62.136.1). It is during the early eighteenth century that the identities of individual silk designers become known. One designer, an Englishwoman named Anna Maria Garthwaite (1690–1763) is notable for the fact that a large collection of her designs have survived, and silks woven to these designs have been identified