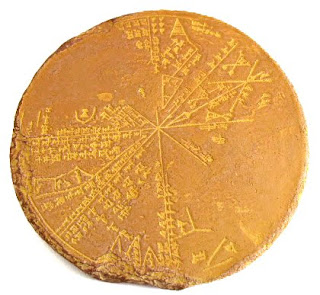 Astronomical charts have a long history. This Sumerian star chart, 'Planisphere', engraved on a clay tablet illustrates segments of sky map above Mesopotamia. This 'Planisphere' has been found in the library Ashurbanipal in Nineveh of 650 BC. Long thought to be an Assyrian tablet, computer analysis has matched it with the sky above Mesopotamia in 3300BC and proves it to be of much more ancient Sumerian origin. The tablet is an "Astrolabe", the earliest known astronomical instrument. It usually consisted of a segmented, disc shaped star chart with marked units of angle measure inscribed upon the rim. Unfortunately considerable parts of the planisphere are missing ( approx 40%), damage which dates to the sacking of Nineveh. 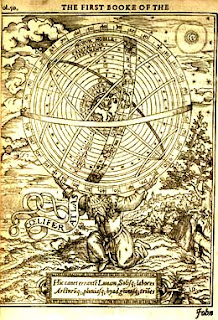 This illustration from William Cuningham's The Cosmographical Glasse (1559) represents Ptolemy's conception of the earth-centered universe. Here the Greek god Atlas, attired in the clad of an ancient king, is carrying on his shoulders an an earth-centered universe. The earth is represented by the two elements earth and water and is surrounded by the other two elements of air and fire. Other bands represent the spheres of the planets, the firmament of fixed stars, the crystalline sphere, the primum mobile, and the signs of the zodiac. Below Atlas are lines on cosmological themes from Virgil's Aeneid. 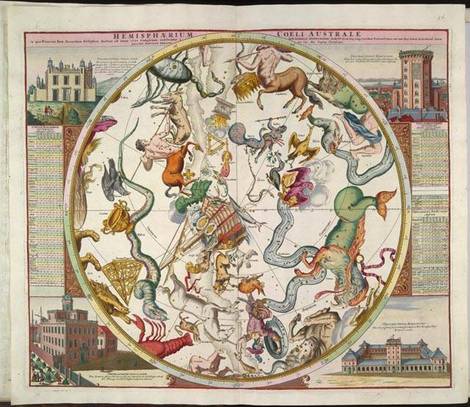 These are pages 2 and 3 of a hand-colored engraving of Reiner Ottens' Atlas maior cvm generales omnivm, Amsterdam 1729. The constellations on this chart are elaborately represented by figures from classical antiquity. In the corners of the chart are illustrations of four European observatories, including that of the noted sixteenth-century astronomer Tycho Brahe (1546-1601). 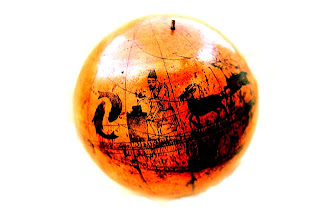 in the Library of Congress is of extraordinary clarity depicting the celestial information in a delicate style. The constellations are arranged based on Islamic astronomy. While prior to 1900 most globes were hollow and made of plaster, this globe is a solid wooden sphere. 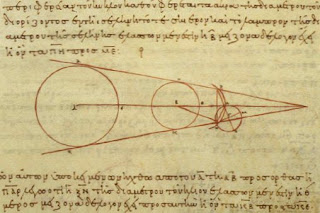 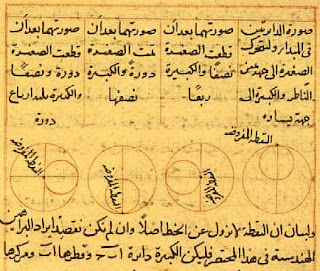 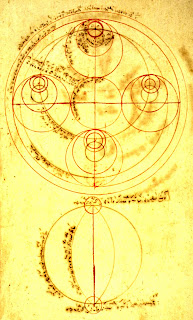 Chioniades who tries to explain Tusi's lunar theory. Unfortunately, his explanation was somewhat confused and not quite accurate. 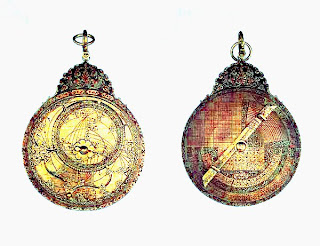 This Persian astrolabe was made by Hadji Ali, and is a fine example of the astrolabes made in Persia during the Safavid period (A.D.1788/9). Hadji Ali is unique among astrolabe makers as he in numbered ten of the fourteen astrolabes he built. Like modern computers, these astrolabes had removable disks. The disks were placed over the face of the astrolabe. Each disc was used in traveling for a different latitude. On each end of the long arm of the astrolabe there is a sighting hole from which the viewer can look for certain stars and aligning the astrolabe with the north star, a pious Muslim traveler could determine the precise time for his location so as to attend to his/her daily prayers on time. On the back is a sine/cosine quadrant graphs of meridian latitutes for the sun for seven latitudes, graphs of azimuths of numerous stars, a shadow-square, scales of co-tangents, and astrological tables. 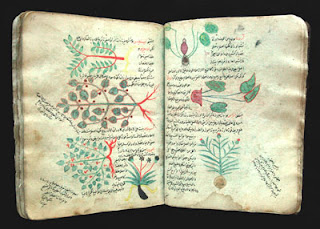 An Arabic botanical manuscript from the 15th century, from the Robert Garrett Collection donated to the Boston University in 1942. 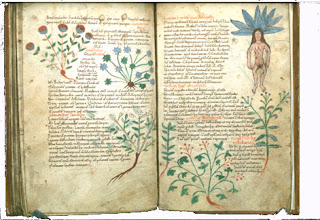 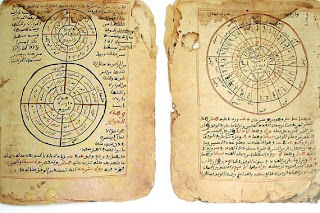 Hundreds of thousands of ancient manuscripts have been collected in Timbuktu, Mali, the legendary city founded as a commercial center in West Africa nine hundred years ago. Hidden in cellars or buried, hid between the mosque's mud walls and safeguarded by their patrons, many of these manuscripts survived the city's decline. They now form the collection of several libraries in Timbuktu, which hold up to 700,000 manuscripts. Timbuktu was once a flourishing center of Saharan trade, and the home of a prestigious university, believed to be one of the first in the world. It was known, at its peak, a city of books.
The manuscripts are written in various styles of the Arabic script and date back to as early as the 13th century. These styles were developed in Timbuktu and the surrounding regions of Mali and West Africa.
Timbuktu's fortunes came crashing down at the end of the 16th century as trade routes shifted, and by the Victorian era it had become a lonely desert outpost. 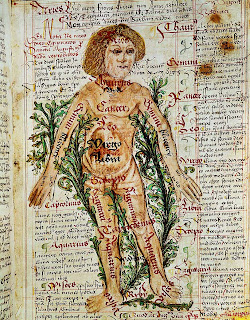 The influence of the stars on the diseases of the human body, from M,Albik's "Tractatus de pestilentia" Bohemia,15th. University Library, Prague, Czech Republic 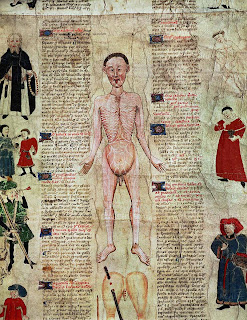 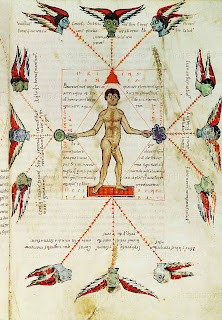 This graphic chart depicts the time path of the universe since the Big Bang. These types of charts are creatively used in to describe various scientific theories such the expansion of universe through inflation. 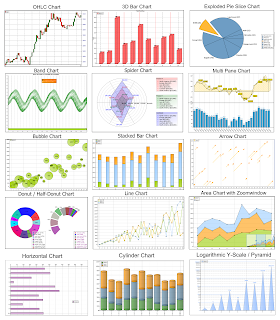 Statistical charts are increasingly becoming more important in a modern society. Various computer softwares can easily transform a large set of data into charts, graphs, and statistics of various types in an attempt to provide us with succinct information to make decisions.

Jacques Bertin (1918 -2010), a French cartographer has introduced the term Visual Variable which had a significant influence on the understanding  of visual images . His book Semiologie Graphique (1967) systematically classified the use of visual elements to display data and relationships. The encoding of different visual variables to distinguish information, such as colour, size, orientation, shape, texture, value are essential to code any kind of information, but the most important is to choose and apply the most appropriate variable according to the purpose, objective, and audience of the project.  In Interview with the digital magazine of  InfoVis.net Bertin has said:


Data is transformed into graphics to understand. A map, a diagram are documents to be interrogated. But understanding means integrating all of the data. In order to do this it’s necessary to reduce it to a small number of elementary data. This is the objective of the “data treatment” be it graphic or mathematics.   As we have said, the fundamental question is: which are the groups that the data builds in X, and in Y. The construction that responds to this question is the order-able matrix, that re-orders rows and columns and shows the exceptions at the same time.   These two pieces of information (the groups in X and Y and the exceptions) are invisible in any other construction.... We shouldn’t forget that the three dimensions of the image make the visual perception our most powerful perceptive system. But images have only three dimensions and the consequences of this limit are important. In that sense, interdisciplinary studies will always be difficult, since the geographer puts the space, the historian, time, psychologists the individuals, sociologists the social categories. What is, the, n the “synthesis science” when each academy, each discipline, each research center is defined by their own X, Y, Z components that characterize their information domain?.This way is how you can show the limits of rationality . A particular treatment is justified only within the boundaries of a well delimited set: the data table. But there is an infinite number of well delimited sets. Our rationalization efforts, whatever they may be, will inevitably drown in the infinitude of the irrational.

The following chart shows Bertin's variables of a visual image. 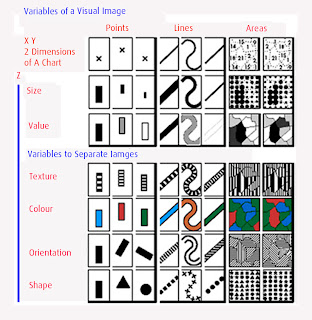 Computer animation creates the illusion of motion by viewing a succession of computer-generated still images. In the past, animation was produced by filming painted sequences on plastic or paper cells. The above animation depicts ancient Chinese astronomers' finding that the sun and planets seems to move in an anticlockwise direction along zodiac. Because 12 branches were arranged in a clockwise direction, astronomers set up the 12 Ci system for measuring the locations of sun and planets. 12 Ci means twelve sections on the celestial equator. The Sun, Moon and the planets apparently move through them in seasonal order. Computer animation can be used to produce special effects for educational purposes, such as study of planetary motions, particles collisions, or fluid dynamics.

Dynamic graphics are used to facilitate understanding of concepts in science, engineering, medicine, education, and business. Computer graphics facilitates the production of images that range in complexity from simple line drawings to three-dimensional reconstructions of data. The evolution of a phenomenon through time and its interactions with other elements can be shown through animation. In this 3-D dynamic design a cube is studied from various angles. These type of animations can be very useful in study of various objects. They can also be used to study the evolution of a process through time.The art of dynamic designs is still at its infancy. With the availability of sophisticated computer graphic techniques the horizon has been expanded enormously for the graphic designers.


Go to the next chapter; Chapter 22 - Pioneers of the modern industrial design, The Bauhaus school, Le Corbusier and The American Streamline Style.