The logos and pictograms for Olympic games change every four years and the sponsoring city develops its own logos. Pictograms first appeared at the Olympics in London in 1948, and they were officially introduced at the 1964 Tokyo Games. These highly stylized designs could communicate information to athletes and spectators alike,when the transmission of accurate information in a timely manner to a large number of people who speak different languages in a very fast pace environment is of critical importance. In the absence of such signs in venues such as Olympic village there would be a need for many written signs in different languages, for example for rowing such as; Roning، Κωπη, λασία, Aviron, قایق رانی، and ボート競技 which not only would be costly but also may confuse the viewers.

Masasa Katzumie as artistic director and Yoshiro Yamashita as graphic designer created the first set of official pictograms for both sports and services of the Games in Tokyo in 1964 . Their project included the design of 20 pictograms for the different sports and a further 39 general information pictograms. According to Katzumie;


It was the tradition of crest designs in Japan that we attempted to put to good use in our design policy. (See: Signs for All Times )

The Japanese Olympic pictograms were elegantly designed, and stunningly efficient in communicating their messages.

For pictograms in Mexico Olympic games, 1968 a group of Olympic identity program designers collaborated on the creation of the symbols, which were employed to designate the events and installations for both the sports program and the Cultural Olympiad. According to the graphic designer Lance Wyman from New York:


In designing our icons we were lucky to have the icon systems designed four years earlier under the direction of Katzumi Masaru for the Tokyo Olympics as a guiding light. A major difference between Katzumi`s icons and ours is that the Tokyo sport icons were bold stick figures that incorporated the entire human figure. Our sport icons focused on an expressive detail, a part of the athlete`s body or a piece of equipment, creating images similar to glyphs found in Mexican preHispanic cultures. We relied heavily on the sport icons as communicators that could cross cultural and language barriers.(see: Olympic Games 1968 Mexico City). 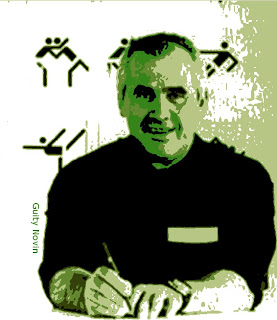 Inspired by the pictograms of Gerd Arntz , Otl Aicher , the design director for the Munich 1972 games, in the words of Micheal Bierut "developed a set of pictograms of such breathtaking elegance and clarity that they would never be topped. Aicher (1922-1991), founder of the Ulm design school and consultant to Braun and Lufthansa, was the quintessential German designer: precise, cool and logical".

Otl Aicher's pictograms for Munich Games were revolutionary in terms of their simplicity and communicative power. This is why in the subsequent venues like Montreal Games they were used without any changes, and in Los Angeles and Seoul only some slight modifications were introduced. However, in Barcelona, the graphic designer Josep. M. Trias abandoned the geometric stylization in favour of the curved lines stylizing the human body in three parts; head, torso and feet .

For the 2010 Winter Games in Vancouver, the Dutch illustrator Irene Jacobs abandoned the minimalist stylization principles for a more old fashion futuristic design. Unfortunately, the design had the look of a commercial clipart vector and was devoid of any imaginative creativity. Although, the Vancouver 2010 official literature explicating the work wrote:


Created in collaboration with illustrator Irene Jacobs of I’m JAC Design, the pictograms represent 19 Olympic and five Paralympic sport disciplines with a simplified silhouette while incorporating the added dynamism of the athlete in motion. The pictograms and sport illustrations were inspired by modern sport photography, pop culture, fashion illustration and manga-style comics (a Japanese genre of comic books) to give athletes an heroic feel and a close-up view of their intensity and athleticism, while also serving as an inspiration to youth (see: With Glowing Hearts).

When compered with the designs of Yamashita for the Tokyo Games or Aicher designs for the Munich Games, those for the 2012 London Games were also a regression in terms of design quality, The London pictograms were in different colors, which, arguably, could only make sense, aesthetically, if they all are juxtaposed beside one another. Given that the minimalism principles were not followed the designs exhibited a lack of cohesion and so many inconsistencies that provoked an observer to comment:


Why not include a fish swimming by the kayak, or leaves stuck to the mountain bike tyres. There is too much attention to irrelevant detail which spells a lack of faith in the dominant aspect of each design...It is clear that photography was referenced, traced and thus blinding the designer/s to the task at hand. They were almost certainly designed in an 'outline' manner. Another inconsistency is the disregard or confusion of dimension. There is confusion as to weather these are to be regarded as 3D or 2D. Either one or the other is suggested (see Creative Review.)


A set of vector drawings (they are emphatically not "pictograms") that answer the brief's content and context perfectly. The content being an embarrassing bad logo -- or "brand" as it's referred to -- and the context being a shambolic, ill-thought out, marketing-and-corporate-sponsor-driven embodiment of mainstream British culture: the London 2012 Olympics. File the Microsoft Office-esque sports clip-art alongside malfunctioning services, high street mediocrity and the tyranny of marketing committees: a true ambassador for contemporary Britain indeed (see Creative Review ).

Go to the next Chapter; Chapter 21 - Astronomical, Statistical and Scientific charts